According to Philip D. Burden, in his book entitled, The Mapping of North America: 1671-1700, Peruuiae avriferae regions typus, “is one of the very few maps printed in the sixteenth century that was based upon original Spanish sources…. The first regional map of the south-eastern portion of North America…. its influence was considerable.” This important map was published in the 1584 Latin edition atlas by Flemish carotgrapher Abraham Ortelius (1527-1598), Theatrum Orbis Terrarum. Did you know that the Theatrum orbis terrarum (Theater of the world) is regarded as the first true modern day atlas? The first edition was published in 1570 in Antwerp in 1570, containing a collection of 53 uniform maps sheets, each with a detailed commentary. To compile his remarkable atlas, Orelius is known to use maps by other cartographers and credited them for their work. 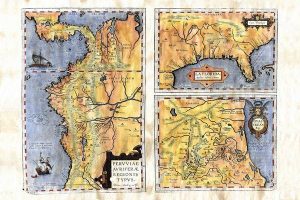 Peruuiae avriferæ regions typus is a combination of three maps on one sheet and can be seen as a summary of 16th cartography. Sourcing from the earlier maps of Geronimo de Chaves, the Royal Cosmographer to Philip II of Spain, drawn from Spanish sources such as the findings of Hernando de Soto and Diego Méndez Méndez, the chaplain of the Monastery of the Incarnation in Lima, Peru, and cartographer for the Viceroy of Peru and others, this map would become the foundation for other maps of the regions for several decades. Essentially, each of the three maps were the works of other cartographers, and Ortelius added detailed descriptions of each map on the back of the sheet, derived from letters and notes from explorers, including Ponce de Leon, Cabeza de Vaca, and Vazquez de Allyon.

The map shows three different regions of South America claimed by Spain- Peru, Florida, and Guastecan (Huasteca or present-day Tamaulipas), and features the river systems, mountains and coastlines, along with decorative cartouches and a galley and a sailing ship in the Pacific Ocean. Did you know that in 2003 a stamp showing the Peru portion of the map was issued in Peru? The stamp was issued to commemorate 100 years of diplomatic relations between Peru and Panama. While the map depicts a misshapen La Florida (Florida) and Mississippi, situated significantly west of its true course, it is noteworthy because it marks the first printed map of the southeastern portion of the United States.

The map served a purpose of meeting the public demand from Spanish elites for an image of Spain’s new territories in the New World. In the process, Ortelius created a better understanding of the Americas and changed perceptions of the world.