Here’s one to throw around during your next cocktail party. The year was 1929, and the date was October 9th. German theologian Gustav Deissmann was rummaging through maps and books housed in the Topkapi Palace library, located in Istanbul, Turkey. While doing so, he discovered one of the most curious antique maps ever made. It was produced by a Turkish admiral and cartographer, named Hagji Ahmed Muhiddin Piri, otherwise known as Piri Reis. The map showed a portion of west Africa, and would set the world on its ear, with a controversy that continues to this day.

The reason? Well, there is another content featured on the map. It happens to be Antarctica. Now, this is strange for a few reasons. For starters, Antarctica was not discovered yet. That would not happen for another 300 years. However, there is something even more curious than that.

Piri Reis, The Most Curious of Antarctica Antique Maps 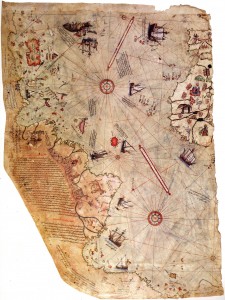 The coastline of Antarctica is mapped in a pre-ice condition. This discovery absolutely shocked people all over the world. Scientists, cartographers, historians; everybody was scrambling to make sense of it. The last time Antarctica was thought to be in a pre-ice condition was 6000 years ago. At that time, it was believed that humanity did not exist. Human civilization would not grace the earth until 4,000 BC, yet and here we have an antique map, drawn by a human, showing a continent, in a pre-ice condition, that would not be discovered until three hundred years later. You can see how this sort of discovery was as awesome as it was perplexing. Furthermore, the coastline was mapped with the kind of detail that can only be achieved with modern satellite technology. So there’s that. They did not know this in 1929. That is why this map is so perplexing.

There is a Rational Reason… in Theory

So, what is really going on? Well the answer to that question really depends on who you asked at the time, and what you still believe today. For the next 30 years or so, there were all sorts of great theories floating about. Some professors put forth the idea that there was a super human race that predated our civilization and had the means of technology to do things that we could only dream of. Why that race no longer exists, they could not say. It seems to be one of those X-Files type theories if you ask me. I guess the truth is out there, we just have to keep looking. 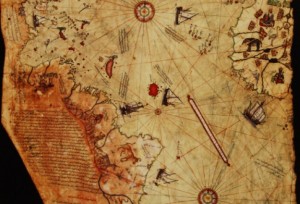 Other theories included one by Professor Charles Hapgood stating that there was such a rapid shift in the earth, Anarctica just happened to slide over 250 miles or so. If you believe that theory, I have some oceanfront land in Arizona I would really like to sell you as well. That theory was quickly dismissed.

However, it was Hapgood who also put forth the idea that maybe what we are not seeing is the coast of Antarctica at all. Perhaps it is the coast of South America due to the unknown island that is floating inconspicuously off the Antarctic coast. Again, this is theory as well. The coastline of Antarctica matches perfectly to what we have on our satellite maps. However, the South America coastline theory makes more sense, because it is easier to wrap our minds around. It is much easier to believe in Santa.

So, the debate still continues. Whether the map features the coastline of Antarctica, or the coast of South America, is just as subject to debate as is the subject of Santa gaining access to houses with no chimneys. Some people say he makes a chimney appear out of thin air, while others say that he simply uses the front door. The Piri Reis map probably has a much more plausible explanation, we will just have to wait for it to be discovered. While Professor Hapgood’s book, Maps of the Ancient Sea Kings, did put forth several theories, they are still just that… theory. Who knew one map could open such a can of worms?