Join us every Sunday night for our Discovery Map Series!

For a century, Americae Sive Quartae Orbis Partis Nova Et Exactissima Descriptio (A New and Most Exact Description of America or The Fourth Part of the World) remained the largest map of the Americas. The number of copies that were printed for circulation is unknown, but there are two copies of this map still in existence, one in the Library of Congress, Washington, D.C. and the other in the British Library, London. Passing hands a few times, the copy at the Library of Congress’ copy was given as a gift in 1949 by Lessing J. Rosenwald. Published in Antwerp in 1562, this detailed geographic map is the work of Spanish cosmographer and cartographer Diego Gutiérrez, and Flemish painter and print publisher Hieronymus Cock. 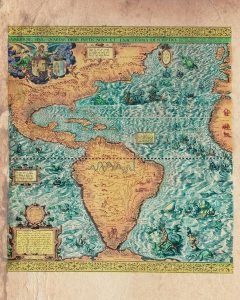 Diego Gutiérrez became a cartographer at the Spanish Casa de la Contratación in 1554, and he most likely got his start in the family business that supplied maps and navigational instruments. This fascinating map is comprised of six skillfully joined engraved sheets, measuring 93×86 cm, and is the earliest scale wall map of the New World or the Western Hemisphere. Did you know that the western hemisphere is oftentimes referred to as the “fourth part of the world?” The Waldseemuller’s map of 1507 catapulted a new worldview that transcended the three known parts of the world at the time-Asia, Europe and Africa, to include an unknown fourth part-the Americas.

The map shows the eastern coast of North America, Central and South America and parts of the western coasts of Europe and Africa. For the first time, the name “California” is referenced on a map, situated near Baja California. Interesting illustrations of mythical sea creatures and mermaids, parrots, monkeys, cannibals and Patagonian giants, along with an elephant, rhinoceros, and lion on the western coast of Africa can be identified on the map. Gutiérrez captured the snake-like shape of the Amazon River, and depicts the goddess Victoria, goddess of victory, behind the closely positioned coat of arms of Spain and France, which is perhaps emblematic of their alliance, forged via the union of Philip II and Elisabeth of Valois. It further features a longitude grid, the equator, the Tropic of Cancer and the Tropic of Capricorn, and six text boxes with descriptive factual notes. Coat of arms depicted also served a purpose of identifying Spanish claims, and to the south of the line representing the Tropic of Cancer were Spanish territories.The purpose of the map was to assert Spain’s claims to new world territories against those of their European neighbors and rival- Portugal and France.

Purchase your own copy here!