Originally produced in 1700 by cartographer Sutton Nicholls and “A New Map of the Most Considerable Plantations of the English in America” shows the English plantations in North America on a single sheet that encompasses five inset maps of Nova Scotia, Jamaica, Bermuda, Barbados, and the Carolinas. English mathematician and geographer professor at Oxford, England, published the map in the atlas titled “New Set of Maps both of Ancient and present Geography” in 1700. Did you know that the first colonies of the British Empire were founded in North America? Virginia was established in 1607 and Barbados in the West Indies, 1625, and in 1619, the first Africans arrived in British North America, where they worked alongside indentured servants. 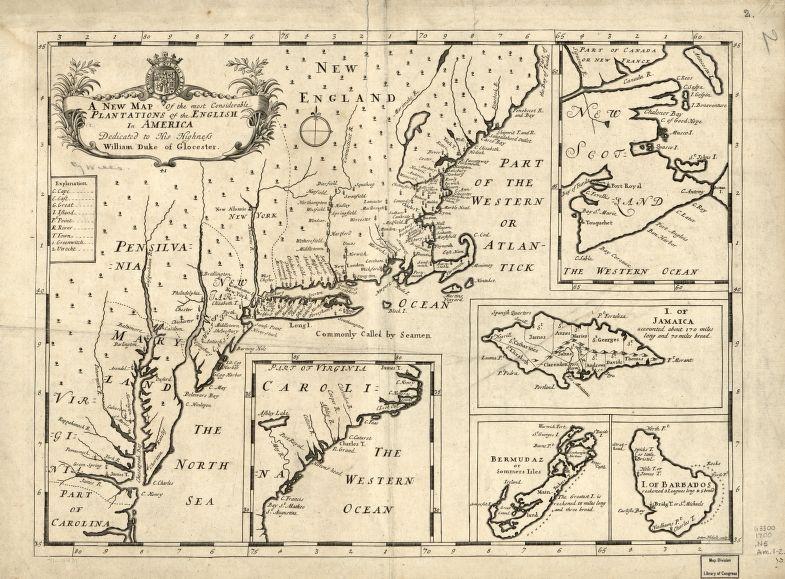 Nicholls’ map illustrates within each region borders, cities, settlements, lakes and rivers, while America, dotted with trees, serves as the main map. The title cartouche is decorated in foliage topped with the crest of Great Britain. The atlas for which this map was a part of was dedicated to the Duke of Gloucester, the son of Queen Anne and George, Prince William, who was a pupil  of Well’s at Oxford. New England, Virginia, the Carolinas, Pennsylvania, and Maryland are all clearly labeled, and the New England portion of the map specifically, is regarded as one of the earliest foolscop size English language maps of that region and the Northeast as a whole. While the map is not incredibly detailed, in the time period that it was created, it was seen as accurate and was highly regarded.

From the Carolinas to Maine, dozens of place names are shown, perhaps a reflection of the areas that were of interest to the English’s colonial ambitions. On the Hudson River is New Albanie, Baltimore is depicted on a less defined Delaware peninsula, while Jamestown, Virginia is shown with settlements. Green Spring, Virginia is also important to note, since today, it is the site of Governor William Berkeley’s mansion and estate, protected by the National Park Service since 1966. The Jamaican inset map is the only one illustrating relief, and there is a list of abbreviations to help identify particular places on the map. Served as a display of British colonial influence in North America and a learning tool. Did you know that Nova Scotia was known as New Scotland? The inset map in the top right corner depicts New Scotland, with Port Royal , which was founded in 1605 by Samuel de Champlain.

Well’s map is a beautiful depiction of its colonial interests in North America and served as an educational tool.