In 1633, Pascal Roiz created the nautical chart titled by cataloger, A Portolan Chart of the Atlantic Ocean and Adjacent Continents. Pascoal Roiz was a Portuguese cartographer and portolan maker with origins in Lisbon and who was active during the 17th century. This historical portolan chart shows the Atlantic Ocean, southeast Pacific Ocean, the southwest Indian Ocean, along with the continents of South America, Africa, Europe, and parts of North America and Asia. The portal technique of mapmaking was made famous by Spanish mapmakers, and Portolan charts were essentially navigational maps based on practical descriptions of coasts and harbors that helped sailors in planning their voyages.

Portolan charts provided directions and sailing instructions aimed at ensuring safe navigation for ships. Carta Pisana is the oldest portolan chart and dates from the late 13th century. Portolan charts, like Pascal Roiz’s were based on directional observation and personal experience and generally lacked topographic features, with the exception of coastlines. This map is beautifully decorated with numerous, elaborate compass roses and rhumb lines. The system of rhumb lines is color-coded, representing the different wind directions, while the ornate compass roses were designed to gain more precise directional bearings. 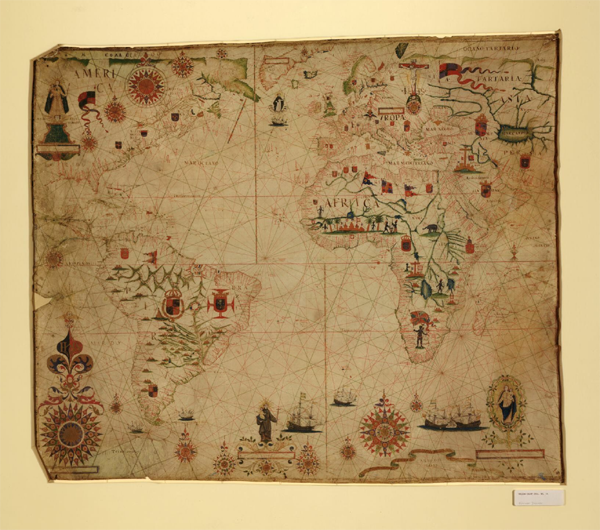 The continental interiors show many speculated rivers, while there are flags, insignia, coast-of-arms, and religious figures throughout the map in the different regions. The map illustrates a crucifix resting on a skull (perhaps representing death) between Poland and Russia, Santo Antonio (Saint Anthony of Padua) holding the baby Jesus and a floating ‘Corpo Santo’ in the North Atlantic. Two separate vignettes of the Virgin Mary holding the baby Jesus are also displayed on the map; one in North America bears the inscription “N S DA NATEVIDADE”, which stands for Nossa Senhora da Natevidade (Our Lady of the Nativity); the other, in the lower right corner is of the Blessed Virgin. Enveloped in a motto banner is the year “Anno de 1633”, indicative of the year that this chart was created.

The continent of Africa appears prominent on the chart, featuring natives, what appears to be a large fort, an elephant, several buildings (some religious) that may signify the establishment of settlements and flags that are perhaps an indication of the colonial power(s) in the region. The purpose of this portolan chart was to serve as a navigational tool for sailors venturing into the Atlantic and the different continents, along with identifying colonial territories.