Map of the Western Hemisphere

Say goodbye to the old age and hello to a new era… Jan van der Straet in his title plate engraving from his print series entitled Nova Reperta (New Inventions of Modern Times), designed around the 1850s, echos those words through his striking depiction of an evolving world. Map of the Western Hemisphere is one of nineteen plates in the series that was published in Antwerp by Philips Galle in his 1600 edition of Americae Retectio, a notable historical picture atlas. Straet, called Stradanus was a Flemish painter of the late Renaissance, who joined the Antwerp guild of painters in 1545, and who worked in in Florence, Italy, where he produced tapestries for the Medici dukes. He is known for producing religious subjects and hunting scenes. By the mid-to late 1500s, Straet had begun his collaboration with Philips Galle (1537-1612), one of the most important engravers of prints in Antwerp during that time. 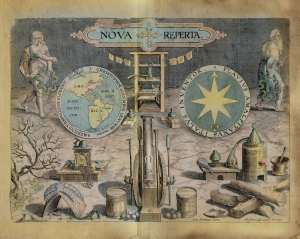 At first glance, the image does not scream map, but it is a powerful depiction of Europe’s self-perception during the early modern period, renaissance discoveries and inventions, and scientific advancement. Europe is positioned as the dominant world power and the discovery of America and Africa is presented as European achievements. The two medallions at the top forms the focal point of the map, with the medallion on the left encircled by an inscription referencing Christopher Columbus and Amerigo Vespucci, depicting two hemispheres North America, naming Florida and South America, labeling Peru. Did you know that the continents of North and South America were named for Vespucci? On his voyage to the New World in 1501, he confirmed that the Americas were separate continents and not part of Asia, as he and many others, including Columbus believed at the time. Also striking on the left is a woman who points to the map, who represents the dawn of a new age or the future.

On the right, the medallion has the inscription Flavius Amalfitanus who is credited with an improved maritime compass design, and a man walks out of the picture plane who represents the past. Representing new discoveries and inventions at the bottom of the scene are a printing press, a clock, a cannon and gunpowder, an alchemist’s furnace, stirrups, silkworms and the wood guaiacum used then to treat syphilis. Did you know that gunpowder was developed by accident? Around 850 A.D, seeking the elixir of immortality, Chinese alchemists mixed together a number of compounds that they uncovered could also be used as a powerful explosive.

This fascinating map served a purpose of emphasizing the advancements in science and discovery, and a changing European perception of their place in the world.

Buy this map for your own collection here: https://great-river-arts.myshopify.com/products/nova-reperta-1600