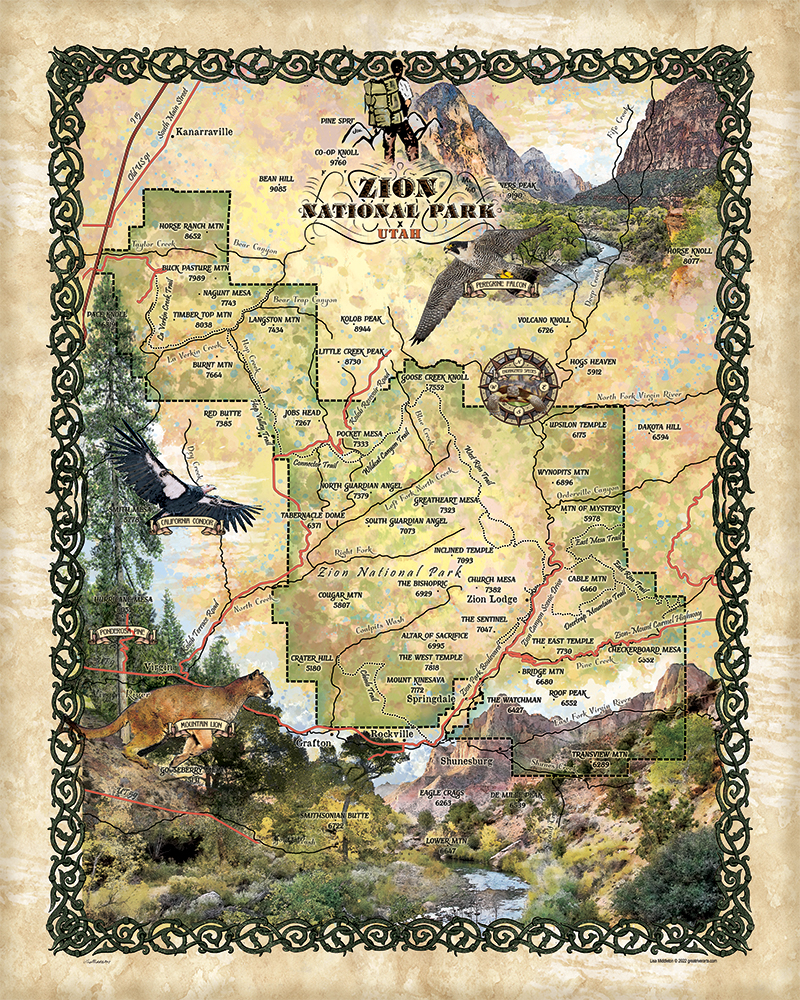 Zion National Park with its red-rock desert and high-altitude forests is located in southern Utah close to the city of Springdale. It’s uniquely located at the junction of the Colorado Plateau, Great Basin, and the Mojave Desert regions. It’s a spellbinding, heavenly wonderland shaped by wind, water, and snow over millions of years of erosion. The park covers 146,597 acres with its highest peak at 8,726 ft at Horse Ranch Mountain and its lowest point at 3,666 ft at Coalpits Wash.

The area was originally given the name Mukuntuweap National Monument in 1909 by President William Howard Taft with the aim of protecting the canyon, but in 1918, a proposal was drafted to enlarge the existing monument and change the name to Zion National Monument. In November 1919, Congress redesignated the monument as Zion National Park. In 2009,  Congress designated 85% of the park a wilderness area.

Among the earliest inhabitants of the Zion National Park area are Native American groups some 8000 years ago, including the semi-nomadic Basketmaker Ancestral Puebloans and later, around 1300, the Parrusits. In the 1860s, Mormon pioneers settled in the region and it’s to them that the name Zion is attributed, naming the area after the Old Testament name for the city of Jerusalem.

One of the park’s most splendid features is Zion Canyon, stretching for 15 miles and climbing  2,640 ft, with richly pigmented walls of reddish and tan-colored Navajo Sandstone. The park is full of hidden gems in a wilderness that encompasses desert, high-altitude forests, plateaus, mountains, canyons, mesas, buttes, rivers, natural arches, monoliths, and 2,000-foot cliff walls.

explore hiking trails, the park’s waterfalls, and viewpoints of incredible stone formations like Court of the Patriarchs (Abraham, Isaac, and Jacob) and Weeping Rock. The park’s most popular landmark— a 1,500-foot rock face called the Great White Throne is a wonder to behold.

The Temple of Sinawava, a colossal natural amphitheater, the Narrows that feature thousand-foot-high canyon walls, and trails like Emerald Pools and Angel’s Landing are worthwhile exploring. Zion National is a true wilderness gem.