Last week we talked a bit about dragons and maps. We discussed their fantastical depiction, their evolution through time and what they might have been based on. However, there are other reasons for their existence, that unless you knew better, would remain secret. Most people though it was simply due to the fact that people thought the earth was flat and they were afraid the would sail over the edge. That was not actually the case, but people were afraid of the unknown. The amazing creatures found on maps were a testimony to this fact. Look at a few drawings and you will see a few creatures that have still yet to be discovered. However, they were placed with intention and purpose.

Take for instance the picture below of some amazing sea life drawn by Abraham Ortelius. This map was produced in the year 1570 and was featured in Theatrus Orbis Terrarum. It shows a few dragons that look like a cross between whales, walruses and sea lions. These sea dragons have great horns and grizzly faces with razor sharp teeth. If you were an explorer, this would have given you pause to think twice about exploring the nearby land. The line of thinking was that if you sailed to close to these lands, you would encounter these fierce creatures. More than likely, this would dissuade even the most adventurous of explorers. However, there is speculation about whether or not they were placed for another reason. It seems the native Flemish settlers were not too keen on having visitors. The best way to keep explorers away? Warn them of what might be lurking off the coast should the dare to venture in to their coastal waters! 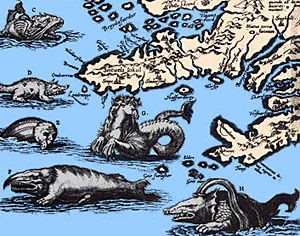 Let’s look at another example. This is another machination by Ortelius that depicts a sea dragon he named Steipereidur. Despite its fierce appearance, this was actually a rather docile species of whale, according to him anyway. He noted that it would attack other whales that were near, keeping explorers and fishermen safe. Therefore, if you saw this creature lurking about, you should be encouraged rather than discouraged. Ahh the imagination that existed in 1603! 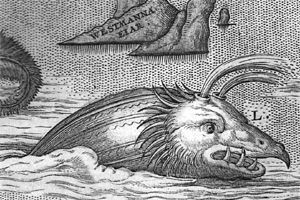 Next, let’s look at a few examples that existed a bit earlier. Olaus Magnus produced the Carta Marina in 1539 that essentially chronicled the amazing things he claimed to have discovered in the ocean. The interesting thing about him is that he was a Scandinavian catholic priest who left his homeland for Rome when the Reformation started. Surely a priest would not make things up right?

Right. However, to say that his drawings and creatures were accurate is a bit of a stretch. Take the drawing below that depicts a lobster. The drawing looks accurate enough, however, he claims that the creature was 12 feet long! Also, what exactly is eating the lobster? Well, that would be a common sea rhino of course. Though this creature is not real, it was undoubtedly based on a real life example of something Olaus witnessed. You have to admit, it does make for quite an interesting scene. 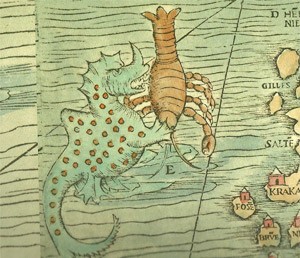 Finally, look at this faced in the ocean below. This was produced in the 16th century and there is little evidence to suggest that anyone actually thought it was real. The reason? Often times sea creatures were commissioned as part of the decorative elements found on maps for those who were wealthy. These were rich “armchair travelers” so to speak. If you had never traveled, why not impress your friends with an ornate map that made it seem otherwise? 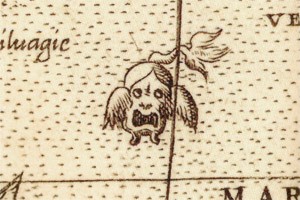 So it seems that dragons lived on maps for quite a few reasons. They may have served as scare totems ward off unwanted explorers. They were an attempt to describe what was really seen by marrying the physical with a perceived personality. They were even used as map “hood ornaments” of sorts for the wealthy. It seems that no matter how you try to get around them, there be dragons on any given antique map!

Stay up to date and get connected by liking Great River Arts on Facebook. Want your own historical hand painted map? Browse our online store!

To discover more “scientific” names of sea dragons check this new book out!