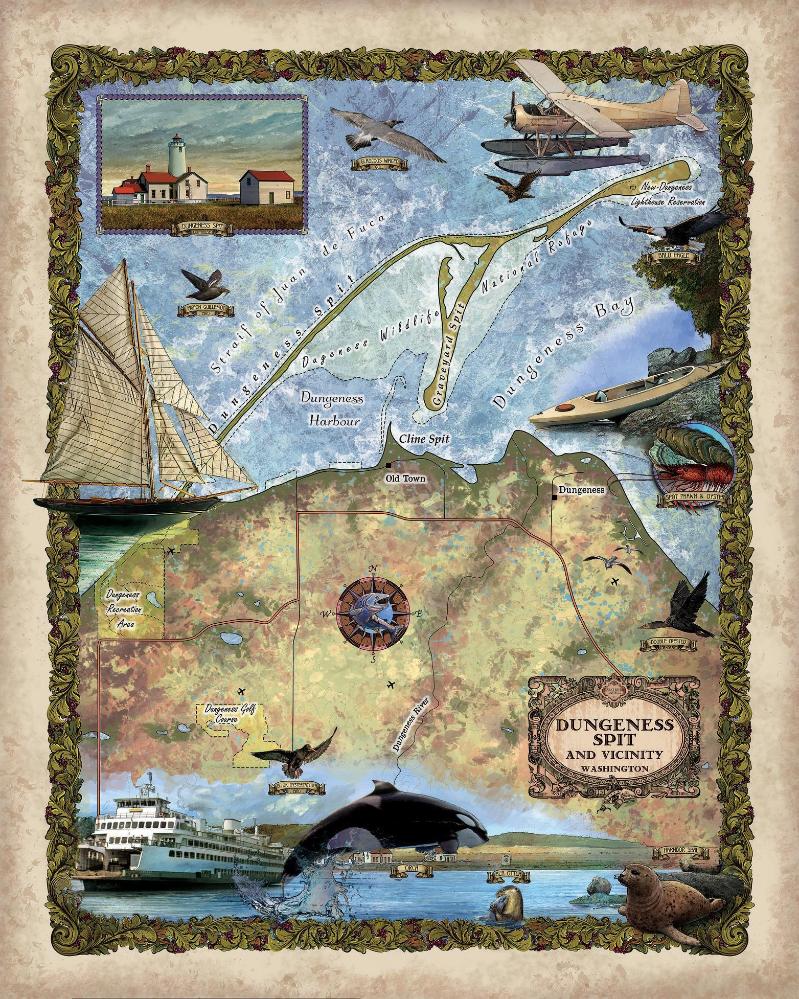 Stretching for roughly 6 miles east of Port Angeles and jutting into the Strait of Juan de Fuca, Dungeness Spit is the longest natural sand spit in the United States. This narrow strip of landform in northeastern Clallam County, Washington shelters the Dungeness Bay. Dungeness Spit is situated entirely within the Dungeness National Wildlife Refuge, which was established by President Woodrow Wilson on January 20, 1915, as a refuge, preserve, and rookery that protects the nutrient-rich tideflats for native and migrating birds during the spring and fall. Its eelgrass beds provide a nursery habitat for young salmon and steelhead, and the remote beach at the tip of Dungeness Spit supports harbor seals, providing a place to rest, birth and nurse their pups.

The Spanish are acknowledged as the first Europeans who created a record of Dungeness Spit. The Spanish expedition, spearheaded by Manuel Quimper in 1790, led to the exploration and mapping of the length of the Strait of Juan de Fuca, though maritime explorer Juan de Fuca, who commanded a Spanish vessel in 1592 is credited with discovering the Strait. Still, it was Captain George Vancouver, a British naval officer and explorer, on his expedition in 1792, who gave Dungeness Spit its name- after the Dungeness headland in the English Channel, in Kent, England, and provided considerable information on the coastlines of the northeast Olympic Peninsula.

Perched near the tip of the Spit is the New Dungeness Lighthouse, operating continuously since 1857 as the first operational lighthouse on the Strait of Juan de Fuca and Puget Sound. Since 1993, the lighthouse has been designated as a historic place, and today, there is a “Keeper Program” geared towards preserving New Dungeness Lighthouse, allowing enthusiasts to become lighthouse keepers for one week, performing light maintenance duties and tours.

Bloodletting on Dungeness Spit is also a part of the region’s history. In September 21, 1868, twenty-six S’Klallam Indians, led by Lame Jack, carried out a raid on a party of 18 Tsimshian Indians camped on Dungeness Spit, in an act of retaliation for the Tsimshians stealing one of Lame Jack’s wives and child. Only a woman, left for dead, survived to tell the tale. It is said that Lame Jack was the only S’Klallams casualty and was killed by one of his accomplices who disliked him.

Dungeness Spit is a haven for wildlife, supporting a wide range of animals, including brants, dunlins, scoters, cormorants, bald eagles and snowy owls, along with Douglas squirrels and seals. Mudflats, salt marshes, sandy bluffs and lagoons, form in the protected spaces of the Spit, creates important habitats for vulnerable wildlife.