No map collection is complete without a nod in direction of Antarctican maps, the steely continent yet unmastered by men, the historic maps of which still allude to mysteries both known and unknown. 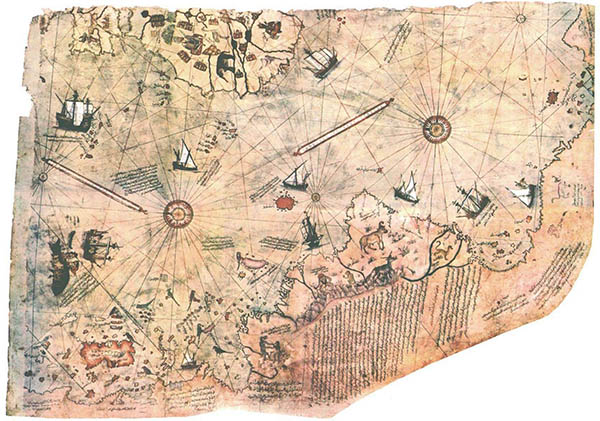 Before the turn of the 20th century, there was limited exploration and scientific activity on and around the Antarctic continent. Exploration campaigns were often accompanied by scientific research, particularly in the area of magnetism for both intellectual and commercial purposes. Magnetic research helped with navigation in sailing at sea, while scientific, intellectual investigations were useful, in part, in determining the actual location of the South Magnetic Pole. Of the seven continents, Antarctica was the last to be discovered, but early explorers were determined to prove it existed. The first expedition within the Arctic Circle took place between 1897 and 1899–Belgian Antarctic Expedition. A collection of our maps–America, Noviter Delineata; Route and Surveys of the South Magnetic Polar Party, 1908-09; Piri Reis Map, 1513; and Authorized Map of the Second Byrd Antarctic Expedition, all offers a glimpse of the early knowledge of the Antarctic regions as it was known by early explorers and scientists.

Jodocus Hondius’ “America, Noviter Delineata” map details the magnitude of exploration in the New World, with an emphasis on North America, Central America and South America, but also depicts an inset map of the known areas of the Arctic Circle. “Piri Reis Map, 1513” depicts the northern coast of Antarctica, south of the Atlantic Ocean some 300 years prior to its discovery. General Food Corporation’s 1934 map, “Authorized Map of the Second Byrd Antarctic Expedition” focuses on the exploration and discovery of Antarctica and Richard E. Byrd’s role in the campaign that combined corporate dealings with scientific exploration. The “Route and Surveys of the South Magnetic Polar Party, 1908-09” map, published in England by the Royal Geographic Society, highlights the British Antarctic Expedition and shows the routes of three exploring parties in Antarctica- the South Magnetic Pole Party, Erebus Party and the Western Party.

These four maps, while different in their depictions, provide some relevant knowledge of early exploration and discovery in the Antarctic region. Common to all the maps is just how limited the degree of exploration was before the early 20th century. There were vast areas that were not explored, but the areas that were, provided useful information that were important to scientific advancement as well as commercial endeavors. Early explorations and surveys paved the way for later explorers to venture into the region, being more prepared to face the harsh environment in the Antarctic and put them closer to establishing the actual point of the South Magnetic Pole.