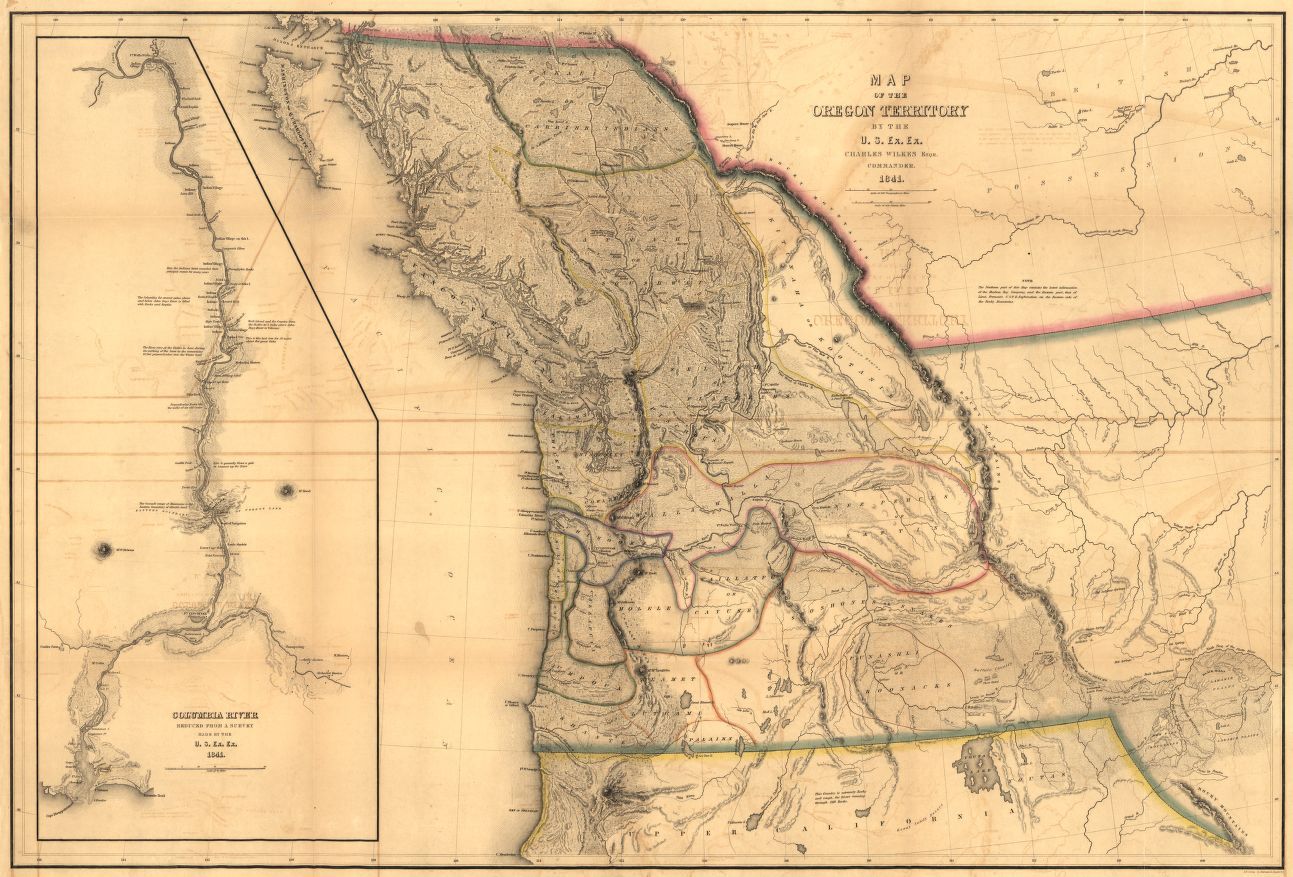 The Oregon Territory was created on August 14, 1848, by Congress, encompassing today’s Oregon, Idaho, Washington and western Montana. Did you know that originally, the Oregon Territory stretched from the Pacific coast to the Rocky Mountains? It covered an area that included present-day Oregon, Washington, and most of British Columbia. Charles Wilkes’ 1844 Map of the Oregon Territory is a U.S. expeditionary map of the region. The United States Exploring Expedition began in 1838, and yielded important information about the Oregon Country, that had been disputed by the British, Russian interests and local Native peoples alike. Wilkes’ map reflect the findings of the expedition in part, but he also published an extensive report on the region in 1844.

Who is Charles Wilkes? Wilkes was an American naval officer and explorer, famous for his command of a 1838 to 1842 exploring and surveying expedition that took him into the Antarctica, islands in the Pacific, and on the West Coast of the United States, but ultimately sailing completely around the world. He was implicated in the Trent Affair, a diplomatic crisis that took place between the United States and Great Britain from November to December 1861, during the Civil War. Wilkes was accused of intercepting the Trent, the British mail ship, on November 8, 1861, in the West Indies, and without permission from Washington, ordered his lieutenant to board and search the ship. In subsequent years, Wilkes was court-martial-ed for disobedience, disrespect and insubordination, and received reprimand.

Wilkes map reflects the then active dispute between the U.S. and British interests over the Oregon Territory, which was settled a decade later. It provides rich detail regarding the names of numerous Native American place names and tribes in Washington, including the Walla Walla, Umpqua, Cowlitz, Cayuse and Callapuya peoples. It is noted that the northern portion of the map was compiled using the latest information of the Hudson Bay Company traders, while the eastern portion draws on John C. Fremont’s exploration on the eastern side of the Rocky Mountain. A large inset of the Columbia River is sectioned off to the left from the larger cartographic work, but is still in significant detail, reflecting the information gathered from surveys conducted in 1841 during the United States Exploring Expedition. The map further shows intricately detailed coastline and terrain, the Cascade Range and the river systems and inland features.

The largest and longest United States’ exploratory expedition resulted in a map that was largely accurate and had considerable importance in the history of the cartography of the region.