In early times, the Mediterranean Sea was the central point of transport, trade and cultural connection between North Africa, Western Asia and Southern Europe. The Italians, the Genoese and the Venetians, in particular, made their mark on the Mediterranean shores as traders. Sailing by way of the Mediterranean and Black Seas was essential to commerce that existed on the shores of the three continents. Nautical charts made it possible to have reliable guides that could ensure safe travel with accurate directional “sea-mapping,” so to speak. “Portolan Chart of the Mediterranean and Black Seas with the West Coast of Spain and Portugal” created by Placido Oliva and published in the late 1580s is a good example of the types of nautical charts that made sea voyages between continents possible. 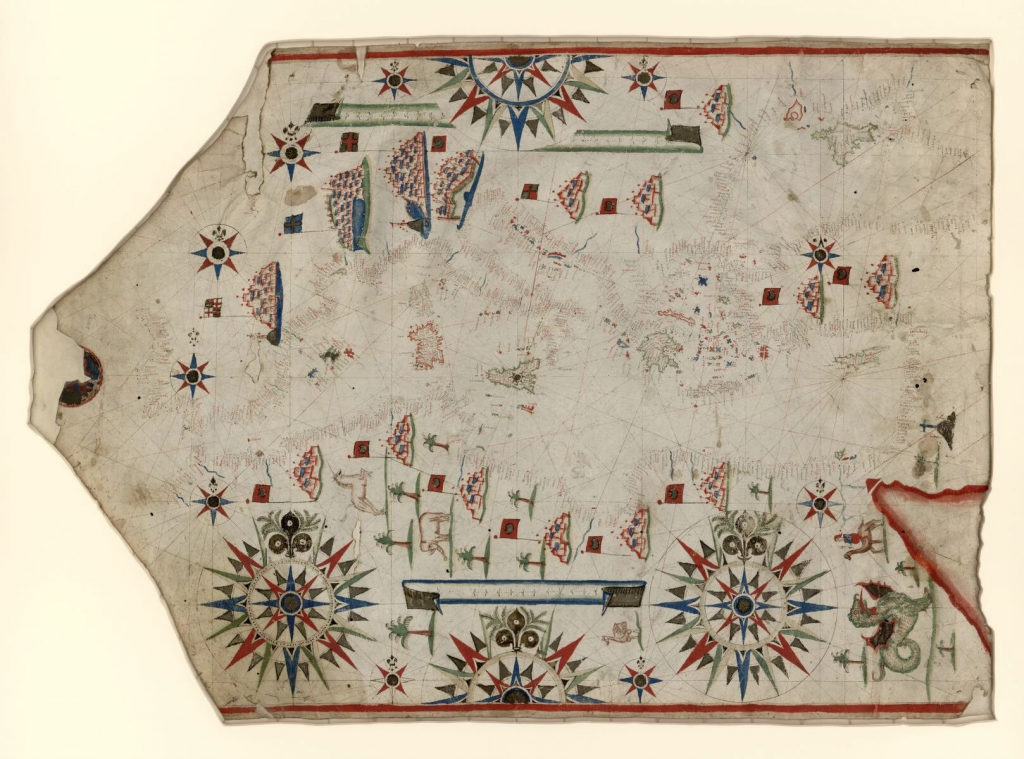 Placido Caloiro e Oliva belonged to a distinguished family of cartographers who thrived in Messina between the period of 1621 and 1665. They were the dominant force in portolan production in Europe during that time and members of the family also worked throughout the Mediterranean region. There were similarities in style and content among the works produced by the different family members, though there is much mystery about their exact relationships. At least 16 Olivia family members are linked to one portolan chart or another.

This Olivia work depicts a large, detailed and richly decorated portolan chart of Europe, North Africa and Western Asia. It extends from the British Isles to the Red Sea. The title of the chart is created by cataloger and is oriented with north to the right as indicated by fleurs-de-lys. There are ten small and four large compass roses centered on Sicily, perhaps emphasizing the region as a crucial strategic location that was highly important for Mediterranean trade routes. The system of rhumb lines is a prominent part of the portolan chart. While the chart is centered on Sicily and the Mediterranean, the decorative elements make it more interesting. They are colored in blue, green and red. Common to nautical charts is the names of the coastal towns written in red ink or what appear to be olive brown, with certain larger regions in dark ink, while rivers are labeled in blue ink. Numerous palm trees in North Africa adorn the map, and the Red Sea painted red in the lower right corner. There are also certain creatures depicted on the chart, like a dragon and a unicorn depicted, which was a common feature of many medieval maps.

Portolan charts had a predominantly practical purpose, but this chart is elaborately embellished with compass roses, emblematic cities, flags, palm trees and animals, both real and mythical. These things improved the value of portolan charts. Still, Roiz’s work was a significant contribution to nautical cartography and played a key role in helping to facilitate trade between Asia, Europe and Africa.