Modern eyes look for maps to be topographical with large-scale detail, contour lines, and accurate graphic representation of natural and cultural features of a region. They tend to serve as significant points of reference and as a navigation tool. These are the types of maps that generally make sense to most people. However, what about maps that do not adhere to any of these principles? What is the purpose of a map that is schematic, largely inaccurate, filled with monsters, and oriented towards biblical views? 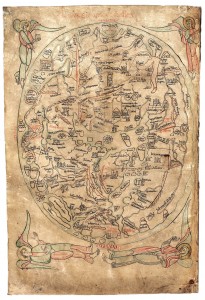 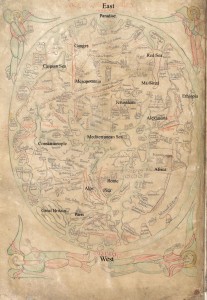 The Sawley Antiquarian Map that dates from the late 12th or early 13th century is something entirely different than the typical map; it is a classical masterpiece that encompasses geography that combines biblical ideas, Greek legends, history, and views of creation and the universe into a visual encyclopedia of sorts. At first glance, it looks like a detailed work of art and not a

map per se. This medieval mappa mundi- world map, was designed by an English monk-Honorius Augustodunensis, and was highlighted as the first image in the “medieval encyclopedia,” the Imago Mundi (Image of the World). The Middle Ages had many maps of this kind that made use of ancient learning, and today, some critics may view the Sawley Map as a comical artifact of dark-age ignorance. However, what cultural, historical, philosophical, or biblical significance does this map holds?

Time, space, legend, and facts are meshed in a sphere or an O, creating a world that is at the center of the universe. The Roman and medieval period tripartite or T-O style of mapping was applied, which presents the earth as flat, and divides the landmass into three segments- the continents of Africa in the right, Asia at the top, and Europe in the left. Situated in the center of the map is the Mediterranean Sea, fully representing the meaning of the term Mediterranean -“in the middle of the earth.” At the earth’s edge sits Great Britain, Ethiopia, France, along with the biblical creatures Cog Magog and the dog-headed cynocephalites. The biblical orientation of the map is further evident with the terrestrial paradise (the long-lost Garden of Eden) placed at the top of the map. Four angels flank the earth at each corner, which can be interpreted as God’s hand in the creation of the world, or angels guarding the earth.

Appreciation for the Sawley Antiquarian Map requires an understanding of the medieval world-view. The map reveals more about its creator’s thinking of the world than the regions it highlights. I find it to be a fascinating illustration of the world through the eyes of a monk, who I believe, was trying to find his place in the universe.

The Metropolitan Museum of Art. “Pen and parchment: Drawings in the