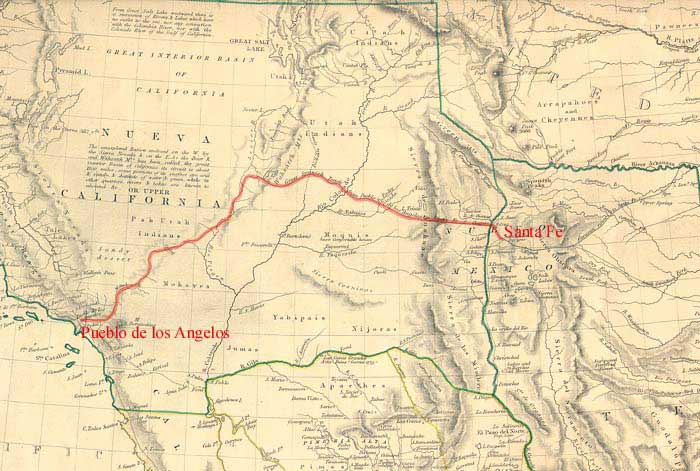 On one of my favorite maps in my collection two trails are prominently posted- the Hudson Bay Trail and the Spanish Trail.

After spending a month in Arizona exhibiting in art shows my interest was piqued…what was the Spanish trail and what legends does it contain? 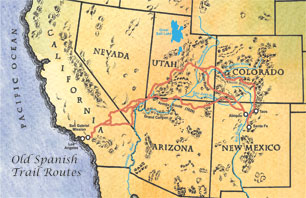 In the early to mid-1800s, the Spanish Trail gained popularity. It was known as the shortest path way to riches one could make between Los Angeles and Santa Fe. As such, it was rife with all sorts of varieties of men, women, and beast. For example, on the trail you could find plenty of adventure in the form of horse theft, raiding, pillaging, and even slave trading. This was peppered in among all of the other pioneers who were seeking fortune. That fortune would come in the form of goods produced from wool in New Mexico that were then traded for horses and mules located on California ranches. The horses commanded a much higher price in New Mexico because of the value that the animal could give. A horse was much more than just a working animal. It was a form of transportation, a potential form of revenue if you decided to breed your horse and sell the resulting livestock, and also the preferred method of travel out on the trails, that were not as suitable for carriages and the like.

Most of the time, traders and such would take advantage of the late fall temperatures that also came with lower water in the river to make their annual journey. This kept the horses in good spirits, and healthy as well. It also kept any travelers in the caravan from getting ideas of their own concerning mutiny or theft. 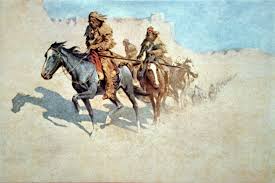 Yet more so than any threat from a bandit or raid, it was the trail itself that presented the biggest challenge. It was considered to be the longest, most strenuous travel route in America at the time. Pack mules would take their time traversing the trail so as not to lose anything or have a misstep. Men and boys would take to the trail seeking adventure, military expeditions used it as a thorough fare, and Indians served as guides along the way since they were already familiar with the land and its natural resources. It was a rare moment in history that presented itself in the form of 2700 miles of complete, raw, untouched frontier adventure. 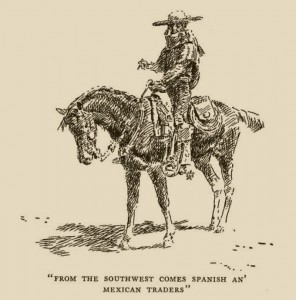 The trail gets its name from the Spanish inhabitants that populated Northern Mexico and Southern California. These Spanish colonies had been around since the early 1600s, about a decade before Plymouth rock entered the picture with the pilgrims. Even though San Gabriel (the mission) and Monterey (A local presidio) were established by the year 1771, it would be another 50 years before the trail would established as a route through the high country of New Mexico to California’s fertile trade climate. 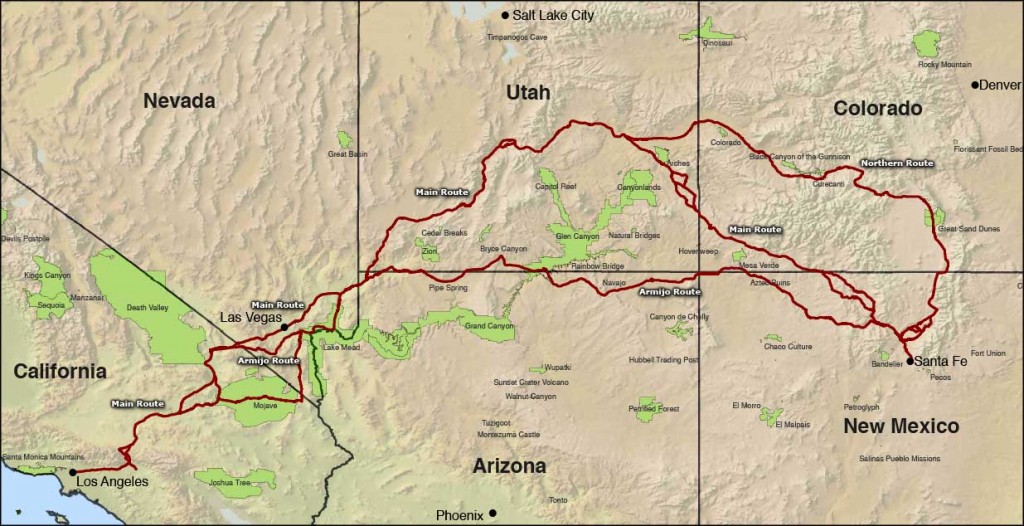 The trail actually consisted of three different routes. The main route had its starting point in Santa Fe New Mexico, and continued northward in a wide loop sweeping through the central part of Utah. This helped avoid the deep River gorges that were associated with the Colorado River, before it hooked downward, through western Utah to some artesian springs. At the time is was a non-assuming stop, today we know it as Las Vegas. Though humble, it was probably the largest watering hole to be found on the trail before a caravan would then cut across the Mojave Desert towards the San Gabriel Mission.

From the Mission, you were only a few miles from Los Angeles. In fact, only 9 miles separated the distance between the Mission and the burgeoning city. Los Angeles was a large supply point for travelers of all kinds. For many seeking fortune from trade, it marked the end of the trail. This is where they would proceed to a merchant and bargain their wool for horses. Once the trade was complete, they would make the return journey home.

The main route avoided some of the more difficult Canyon passages that were found on the original Armijo route. However, it had its own trappings. River crossings were tough, especially near the Spanish Valley where the Colorado River was known to be deep and wide. Also, the Green River was of similar size and presented the same sort of danger. A misstep could mean horses and people would be swept away and drown. Yet, most were willing to chance that since they did not have to subject themselves to the difficult canyon conditions found with the original Armijo Route which we will take a look at next. 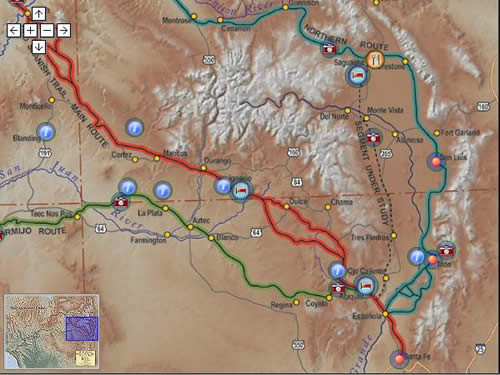 The Armijo Route, first opened the Spanish Trail. It took a much more westward, and direct, path to California. It cut across sections of Northern Arizona, and dipped upward slightly into southern Utah before slowly descending back to California. Even though the route was a bit more direct, it was fraught with more turns and curves than the main route. Also, the main route ended in Los Angeles, which was already an established supply point, where as the Armijo Route did not. This route was known as one of the most difficult because it cut directly through the Mojave Desert. Often times, travelers would have to find water by digging up parts of the old riverbed.

Lastly, there was a third route. The Northern Branch traveled from Santa Fe to Taos, New Mexico. From there, it ran into Colorado, before it cuts through Utah and finally found its way to California. River crossings were often made at Grand Junction, Colorado and Green River, Utah. This was the curviest route on the trail, and as such was known as one of the more difficult trails to travel. Later on, this early route, established by trappers and traders, would gain new interest by those seeking a viable route for the transcontinental railroad. 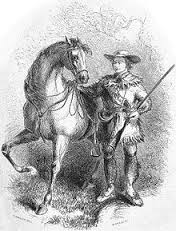 Regardless of which route was taken, the trail was difficult to traverse to say the least. Cutting through mountain ranges, passing through barren sections with limited grass for livestock, and crossing two deserts were no easy task. Often times, one could see the bones of horses in the desert who had died from thirst. Furthermore, the western portions of the trail were only somewhat reliable, even in winter, when rain or snow would bring a little bit of water to the area. Due to the difficult conditions of the trail, most traders would only attempt it once per year.

Life on the Trail

Established for the purpose of trade, life on the trail worked something like this. Usually, a pack train would head out from Santa Fe. The caravan would contain as few as 20 people, or as many as 200. These mule laden trains would arrive with the promise of handwoven goods made by local Indians. Usually the goods were things such as serapes and blankets. Once they arrived in California, they would make a trade with local ranchers. 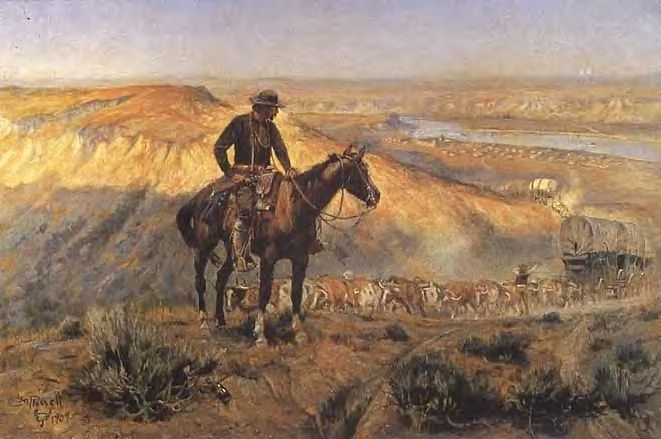 The reason this worked so well is quite simple. California had no wool processors, and very few weavers. As a result, anything woven was considered to be a commodity, and often trade as such. This symbiotic relationship between New Mexico and California served trappers and traders well for many years.

However there was a darker side to the trail is well. The slave trade was prolific during this period. Raiding parties would go out, stealing horses, women, and children. The raiding parties typically consisted of Mexicans, Indian tribes, and ex-trappers. They would take the spoils and sell them to Mexican ranchers in California and New Mexico. The women and children would be used as domestic slaves and the other items sold would be used for maintaining the ranch. This unfortunate part of the trail would have lasting repercussions long after the trade route disappeared. It strained relations between Indian tribes and ranch owners as westward expansion and settlement continued. However, as freight wagons became more and more popular around the year 1848, the old pack routes would become obsolete. Yet, for half a century, the Spanish Trail served as the primary thoroughfare for commerce between New Mexico and California.

You may find the main route of the Spanish Trail on my 1849 Map of Oregon and Upper California fact  here. 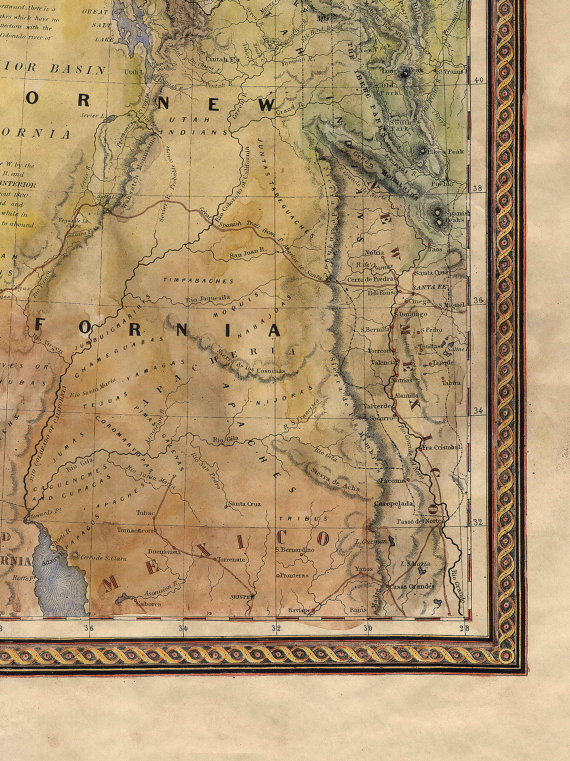 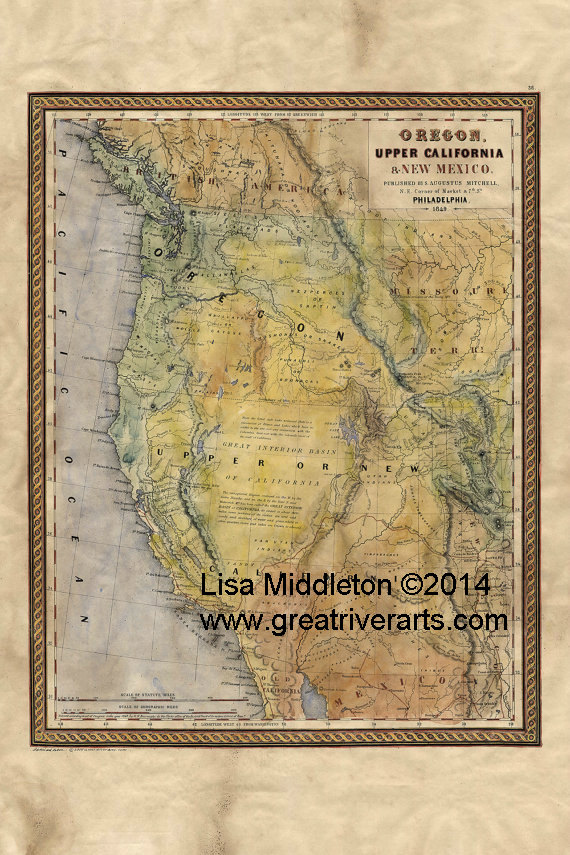