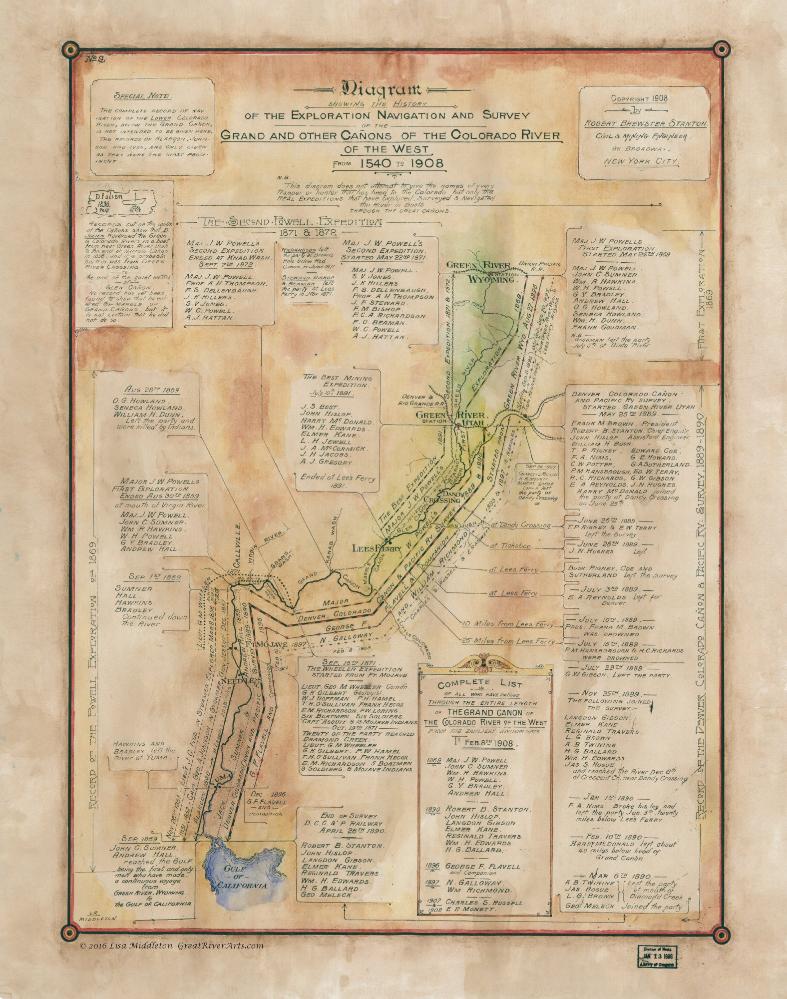 This is a very detailed exploration map of the Colorado River and Grand Canyon, published in 1908 by Robert Brewster Staton. Staton was a civil and mining engineer. In 1889-1890, Staton carried out the Survey for the “Denver Colorado Cañon and Pacific Railway,” organized by Frank M. Brown. He and his team were investigating the Grand Canyon for a possible railroad line. The Survey started in Green River, Utah on May 25, 1889.

Stanton has prepared a detailed and valuable diagram, a skeleton history of the Colorado River. He recorded information about the exploratory expeditions on the Colorado River between 1540 and the date of the publication of the diagram. He gives the names of expeditions that have explored, survey, and navigated in boats through the Great Canyons. The course is drawn from the Green River, Wyoming to the Gulf of California, with the names of various explorers identified on the sides and linked to the river, maintaining their correct position along the stream.

D. Julien, 1836 is the first name to be associated with these canyons. Between the San Rafael and the end of the Cataract Cañons, his name was found etched into the rock walls in three places. He moved across the Green and Colorado Rivers, but there are no records to indicate if he had entered the Grand Canyon or any other.

Julien has remained a mystery explorer with no documentation of his life before or beyond his name carving in the stones.

Major Johns Wesley Powell in 1869 made the first complete descent from Green River, Wyoming to the mouth of the Virgin River. His first expedition lasted roughly three months, from May 24th to August 30 th of 1869. He made his second expedition in May of 1871, ended at Kanab Wash on September 7 th of 1872.

Essentially, it ended in the Grand Canyon.

John G. Sumner is credited as being the first and only man to have made a continuous voyage from Green River Wyoming to the Gulf of California. Unfortunately, three in the Survey Company drowned, including its leader Frank M. Brown.

This is a beautiful work of historic significance that is clear and well put together.