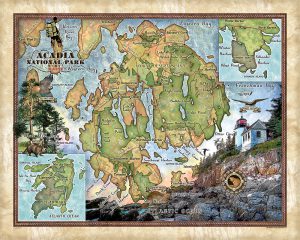 Acadia National Park is commonly referred to as the Crown Jewel of the North Atlantic Coast of the United States and is a national treasure of notable proportion located along the mid-section of the Maine coast. The park was established in January of 1929 and protects just under 50,000 acres, of which, roughly 35,332 acres are owned by the National Park Service and roughly 12,416 acres are privately owned lands but are under conservation easements managed by the National Park Service.

The landscape of the park is distinct and diverse, featuring granite mountains, breathtaking lakes, rocky coastlines, ponds, and many species of plants and wildlife. Imagine the different parts of the park having their own unique characteristics. This park has been known by several names through time, including Pemetic, Mount Desert, Schoodic, Sieur de Monts, Homeland, and Lafayette. In 1929, the name of the park was finally changed to Acadia National Park, in honor of the former French colony of Acadia which, at one point included Maine.

Acadia’s rich human history dates back some 10,000 years ago with the Wabanaki people, who have called this area ‘homeland’. In the 17th Century, European settlers entered the region and by the 19th Century, that park witnessed an influx of summer visitors from wealthy families. Today, while a small national park, it sees a lot of visitors annually.

An interesting fact about Acadia National Park is that it is the first national park created solely from private donations. The vision and donation of private citizens (philanthropists, conservationists, and landowners) all played a part in the founding of Acadia help to shape the formation of the park. George B. Dorr aka “Father of Acadia National Park,” spent the majority of his adulthood overseeing the park’s growth and development. Charles W. Eliot, the President of Harvard saw to it that over-development of this coastal splendor was prevented. John D. Rockefeller donated roughly 11,000 acres of land and built roughly 40 miles of the infamous Carriage Roads.

For all its beauty, danger threatened to tarnish the park when in 1947, “The “Great Fire” of Mount Desert Island destroyed 10,000 acres, setting ablaze fir and spruce trees. Out of the destruction eventually came greater diversity of plant life in the park with the regrowth of Birch and aspen trees in their place.

Did you know that Cadillac Mountain is the park’s most famous of 26 mountains? It’s named after French explorer Antoine Laumet de La Mothe, Sieur de Cadillac, and rises to 1,530 feet, making it the tallest mountain on the Atlantic coast. It’s the first spot that the sun rises in the eastern US between early October and early March.