Imagine a map of the Mississippi River that shows all of the cities and towns along the river and all the landings where a steamboat might stop. Make the map about three inches wide and in one continuous strip showing the entire river from the Gulf of Mexico to its source at Lake Itasca, Minnesota. If you imagined correctly, you would have a map that is about eleven feet in length, like a long streamer or ribbon. Now roll up the map to a couple of inches in diameter and put into a cylindrical container that can easily fit into your pocket! 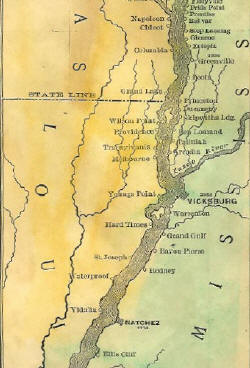 Such maps do exist. In 1866, Myron Coloney and Sidney B. Fairchild patented and published a map like this in St. Louis. In 1887, explorer Willard Glazier produced another ribbon map that included a lake he called Lake Willard, which he believed was the TRUE source of the Mississippi River. The 1866 map was sold commercially in St. Louis and along the river for a number of years. The maps were housed in a wooden cylinder with a rounded wooden cap at each end. On the side, a slot was cut where the map could be pulled out to give people a way to grasp it when pulling the map from its case. The patent granted the inventors was for  “the idea or design of maps upon strips of any material,” as stated on the map itself. Glazier’s 1877 map was folded and printed with the guide to his canoe trip from Lake Willard in Minnesota to the Gulf. It includes most of the river villages we know today, as well as many which have since been washed away by Mississippi River flooding.

These maps both show considerable detail, but could never be used by a steamboat pilot for serious navigation. The river was much to complicated with islands, tricky bends, wing dams, and other obstacles to fit on a map like this. The ribbon map must have been made for the tourist or other traveler on the river who had enough expendable money to pay for such a souvenir. While the boat’s pilot had a detailed map to follow (often only in his memory), these ribbon maps served the traveler with a way to keep track of the boat’s progress on a long trip. It even pointed out a few points of interest. A notice in the July 10, 1866 Missouri Republican stated, “To the traveler, it will be an exciting guide and companion, and will furnish him with more information at a glance than he can secure from a constant questioning of the officers of the boat… to say nothing of avoiding a short answer from, or an immensity of annoyance to, these monarchs of our Mississippi River palaces.”

Only a handful of original ribbon maps exist today, scattered in museums across the country. The Smithsonian has one and the Missouri Historical Society of Missouri owns three Mississippi River ribbon maps. Each of these is extremely fragile and can no longer be handled. One of the maps at MHS is about eight inches wide, and has all the detail a riverboat pilot would need. Housed in a larger wooden box with a glass window, the map winds from a roll on one side of the window to a box on the other side of the window. The map in the window only shows an area some 30-40 miles… new scrolls could be set in place as the pilot traveled the length of the river.

In the 140 years since the first map appeared nearly every one has disappeared. The Willard Glazier Reproduction here on www.greatriverarts.com is the only ribbon map we know of that is still available for sale to the public.