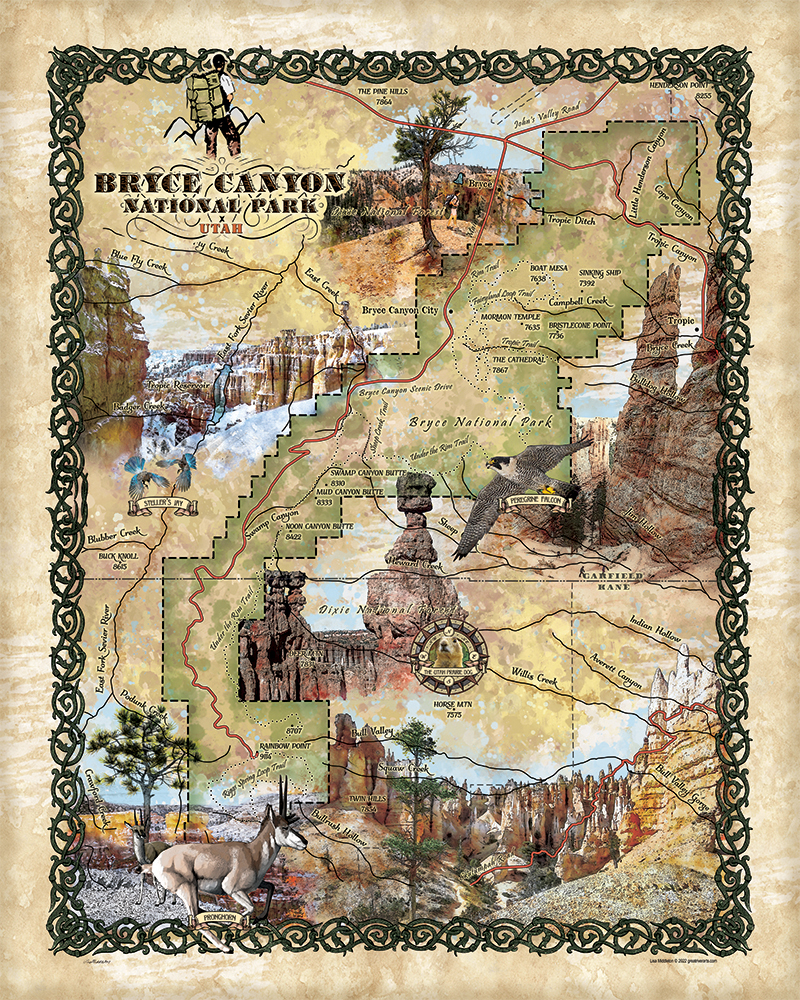 Enjoy your memories with a Bryce Canyon Utah map art print! Great as gifts to for your adventure loving friend. All of our maps are easy to frame and uv resistant.

If there’s a natural wonder that will have you marveling at its unique beauty, it’s the Bryce Canyon. Looking at it, you find that it’s not a single canyon, but rather a series of large amphitheaters carved/etched into the edge of the high Paunsaugunt Plateau. The most popular of the natural horseshoe-shaped bowls is Bryce Amphitheater, characterized by irregular columns of rocks called hoodoos. This is the site where you can find the largest concentration of hoodoos on earth.

Bryce Canyon National Park is an expansive reserve located in southern Utah was established in 1928 and covers 35,835 acres. It rises more than 8000 feet above sea level. This exquisite crimson-colored series of rock spire formations were carved by nature- snow, water, and wind- for millions of years.  The Bryce Canyon region’s earliest settlers were Paiute Native Americans and later on, in the 1850s, Mormon pioneers settled in the area. The park is named after the homesteader to the region in 1874, Ebenezer Bryce. Originally, in 1923, the area around Bryce Canyon was designated as a national monument by President Warren G. Harding, and in 1928,  it was redesignated as a national park by Congress.

This magical place is a mixture of warmth and radiance in the summer and whimsical beauty during the winter. At 9,105 ft., Rainbow Point is the highest part of the park and is situated at the end of the 18-mile scenic drive, the area that offers the classic auto tour. The view from Rainbow Point includes Aquarius Plateau, Bryce Amphitheater, Henry Mountains, Vermilion Cliffs, and White Cliffs. This is where all the colorful layers of the Grand Staircase formation can be viewed. At 6, 620ft.,  Yellow Creek is the lowest part of the park.

One of the most popular park activities is the walking part, or all of the 11-mile Rim Trail situated between Fairyland Point and Bryce Point, which can be accessed from Sunrise Point and Sunset Point and the historic Bryce Canyon Lodge, open since 1925. The sprawling Bryce Amphitheater can be viewed from overlooks at Bryce Point, Inspiration Point, Sunrise Point, and Sunset Point found a couple of miles within the park.

Sightseeing, camping, and hiking can be enjoyed during the warm months, while skiing is typical during the wintertime. Bryce Canyon National Park is a natural wonder that keeps giving beauty, inspiration, and natural splendor.