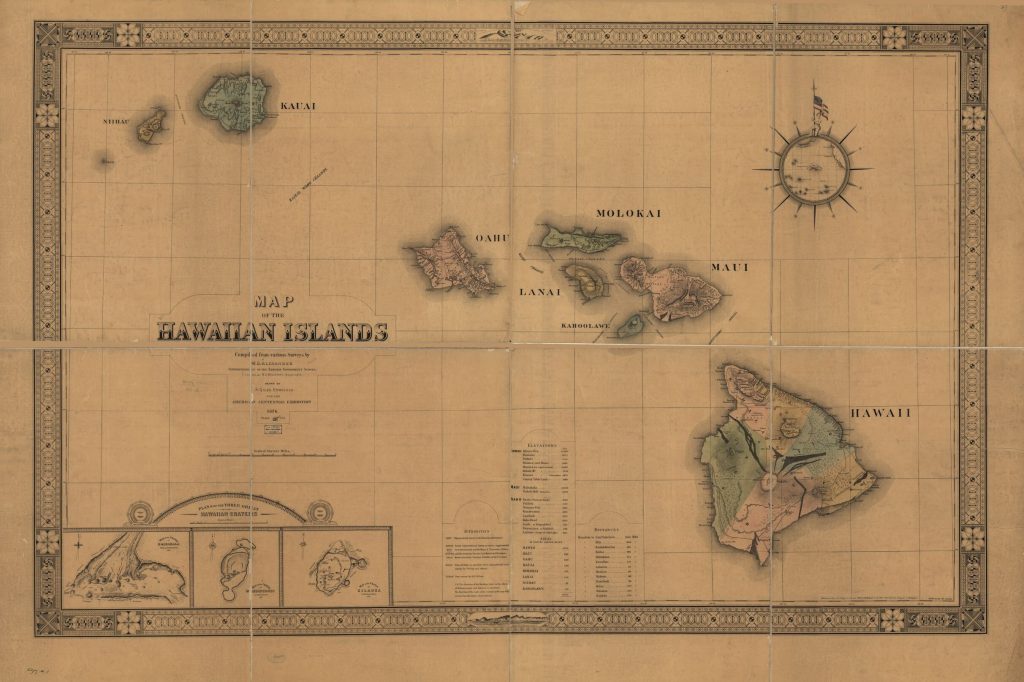 The map highlights the main topographical features of the Hawaiian Islands and information not commonly found on a map of this type, such as the size, distance and elevation of the major islands, as well as historic volcanoes and lava flows and the main forested areas on Hawaii. As a modern standard map, the eight main Hawaiian Islands are situated on a network of lines of latitude and longitude, with the elevation of Hawaii, Maui and Oahu and the square mileage of each of the main islands, along with a few inset images as well. In the bottom-left corner of the map are views of the three great Hawaiian volcanic craters at Haleakala, Mokuaweoweo, and Kilauea, while in the top-right corner is a decorative compass wind rose that envelops a map of the Pacific Ocean. Also portrayed are the credentials of the survey authorities that present data for the creation of the map.

The map seeks to establish Hawaii’s political space in the Western geographic history. The map’s scientific authority is reflected in it being produced through a modern, scientific process that relied on the trigonometric methodology, while the sets of measurements lend to the accuracy of the map. Since this map was a state project, the scientific appeal and accuracy of the map boosts the Hawaiian Kingdom’s place in the global community and showed its dominance in the Pacific. Furthermore, it seemingly established its legitimacy as a modern state at a time when the Kingdom’s sovereignty was challenged by the U.S. The map was also a demonstration of Hawaii’s ability and authority for cartographic self-definition and a product of national pride and significance.