Piri Reis Map, 1513, is considered to be a world map, but portions of the map is missing, with only about one third of the map surviving today. The significance of the map is relevant to the history of the exploration of the New World or the Western Hemisphere. It is believed that the map was compiled by Piri Reis from data obtained from numerous source maps– some twenty charts. Reis was a famous Ottoman-Turkish admiral, geographer and cartographer in the sixteenth century. His primary interest was cartography and because of his role in the Turkish navy, he had considerable access to source material housed in the Imperial Library of Constantinople. The map is the surviving portion of a larger world map and is a depiction of the world as it was perceived by cartographers in 1513. 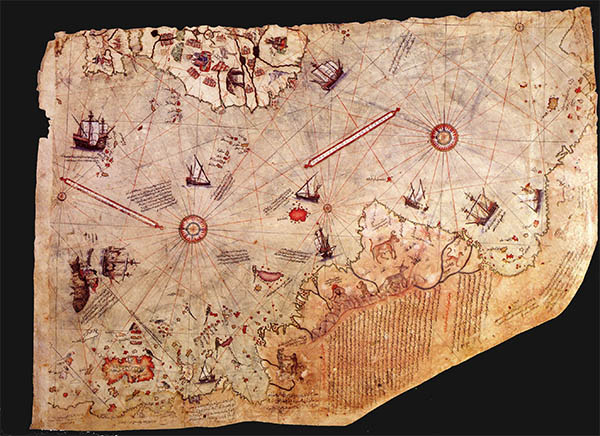 Notably, the map depicts the northern coast of Antarctica, south of the Atlantic Ocean roughly 300 years prior to its discovery, shown as a land mass not covered by ice cap as it occurred thousands of years ago. The Caribbean, Central America, West Indies and the north coast of South America are shown. The map reflects the cartographic style of the time, featuring elements commonly present on a mappae mundi and portolan chart. In the eastern portion of the map, several ships are illustrated– the majority of which are Portuguese caravels, ‘tuti birds’(parrots) are shown on the island of Antilles, along with several mythical creatures, like cephalopods and dog-headed figures. It also illustrates several real-life mammals in South America and snakes. More than a hundred place names, a few compass roses and a complex network of color-coded rhumb lines indicating compass directions and prevailing winds are depicted on the map. Furthermore, mountains are drawn in outlines, rivers identified with thick lines, sandy and shallow waters with reddish dots, and the rocky parts in the sea with crosses.

Looking at the map as a whole, more than two dozen legends are depicted on the map, the majority of which are Turkish, and a single legend in Arabic. Accompanying the legends is details regarding the people, animals, natural resources and peculiarities of the New World. A copy of Columbus’s map and of the Americas are shown and reflects the ever evolving geographical perception of the region. The Piri Reis Map is an important, historical cartographic work that was derived from the meticulous comparative research of Reis, who had a lifetime of experience in navigation. This map, in part, served the purpose of showing the discoveries of early explorers in the New World.