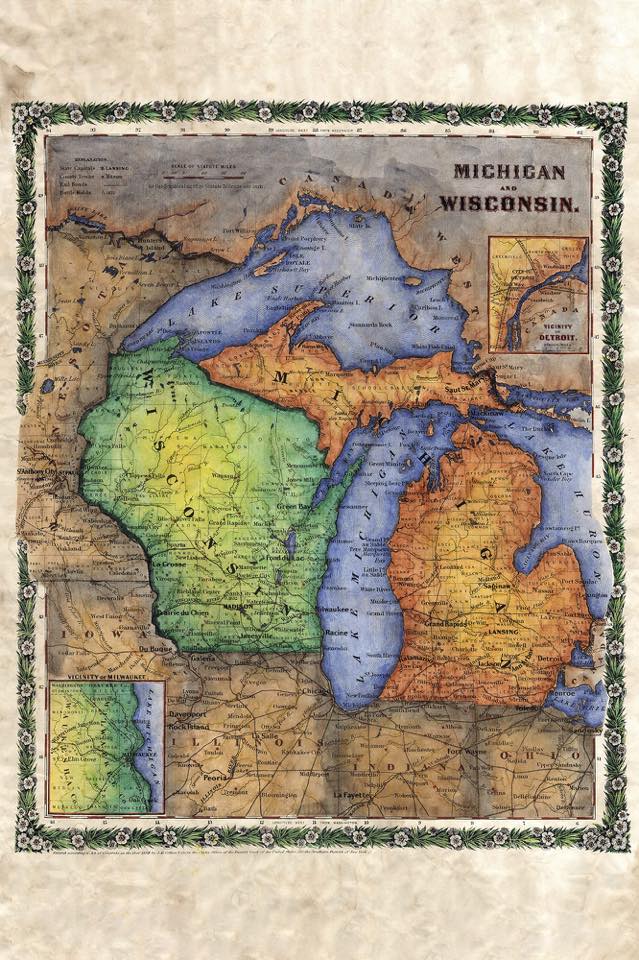 Map of Michigan and Wisconsin 1858

This is a beautiful map of Michigan and Wisconsin that utilizing a copperplate engraving method. This was quite popular during that time period, and often times copper plates were bought and sold just as common pieces of construction machinery are today. They were interchangeable and could be used on different presses, or modified to make them work if need be. The copper plates were used as the foundation to produce intricate works like the one you see here.

The map features Michigan and Wisconsin with parts of Illinois, Minnesota, Iowa, Ohio, and Indiana
shown as well. In addition, a few of the great lakes can be seen as well, particularly Lake Superior,
Michigan, Huron, and Erie. There are also a couple of insets on the map that highlight the vicinities of Detroit and Milwaukee. The cartographer G.W. Colton, was very active in the 1800s. He was known as an expert in his field and was also regarded as an innovator. Of note worthy mention here is the floral border depicted on the map. It was the only such border used by Colton in the entire atlas.

Also of interest is the legend which contains a reference to the Black Hawk war of 1832. This was a
particularly bloody skirmish that involved disputed lands between the Native Americans and the United States federal government. 1832 marked the tail end of the fur trade that was once thriving and produced good relations between the Native Americans and US government. In fact, relations were so good that the Indians had quite a bit of political influence for a while. The Black Hawk war of 1832 all but ends the fur trade which had declined anyway. The reason? The popularity of fur hats in Europe had waned. Agriculture and mining were beginning to blossom into what would later become the economic backbone of the north. Mining would eventually fizzle out as resources were exhausted.

Agriculture would continue to develop however. Many of the crops produced by the northern states
today are a result of exploration and innovation that first occurred around the time this map was produced.