In 1912, an Organic Act renamed the District of Alaska, the Territory of Alaska, which allowed Alaska to be represented in the federal government via a congressional delegate. The territory of Alaska lasted from August of 1912 to January of 1959, when it was admitted into the Union as a US state. Purchased from the Russian Empire on March 30th, 1867 for more than 7 million USD, Alaska was a part of the Russian American colonial possessions, which endured from 1733 to 1867. Before Europeans entered the region, several indigenous groups occupied Alaska for thousands of years, including the Haida, Tsimshian people, and the Tlingit people. 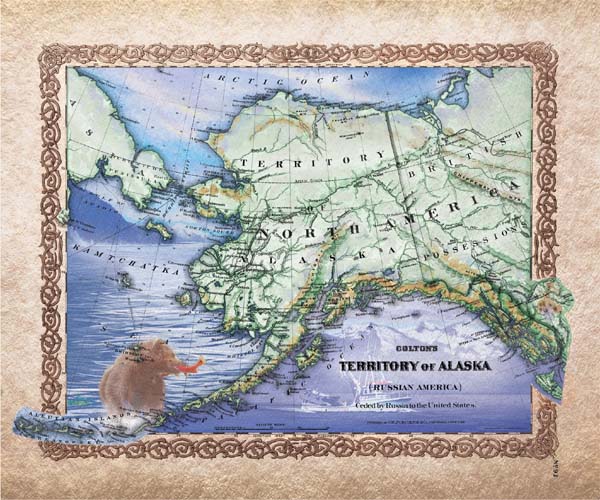 Located northwest of Canada, Alaska is well known for its mountains, forests, isolated villages, and diverse terrain. At roughly 663, 268 square miles, Alaska is the largest state on the basis of land area, and is sparsely inhabited. Alaska is divided into 6 recognized regions, possessing its own unique uniqueness. From its most populous region of Anchorage, the Alaska Panhandle (the region closest to the US), the uninhabited wilderness of its Interior, its coastal region, tundra sprinkled with small villages, and volcanic islands in remote places. Alaska’s natural features make it a breathtaking place, with some of the world’s most beautiful scenery.

The flora and fauna of Alaska are as diverse as the terrain itself. The wilderness supports and shelters Alaska’s wildlife, such as land mammals, including brown, black, and blue bears, moose, deer, lynx, and mountain goats. Smaller furbearers include otters, beavers, squirrels, shrews, and minks. Marine mammals such as humpback whales, orcas, and Grey whales are some of Alaska’s ocean-dwelling creatures. Furthermore, a wide range of bird species inhabits Alaska, including the raven, golden and bald eagle, Sandhill crane, Osprey, puffin, and Sandpiper. With a mosaic of plant life, Alaska’s flora ranges from grasslands, tundra thick forests of Sitka spruce, western hemlock, red cedar, white birch, wild flowers and hardy plants, to semi-arid and tundra plains.

With the largest national park, highest peak, longest coastline, and thousands of rivers and lakes, there is much in the way of activity to enjoy in Alaska, such as skiing and dog sledding in the winter, wildlife watching and scenery, along with fishing, hiking, kayaking, and zip lining, and many more leisurely pleasures.