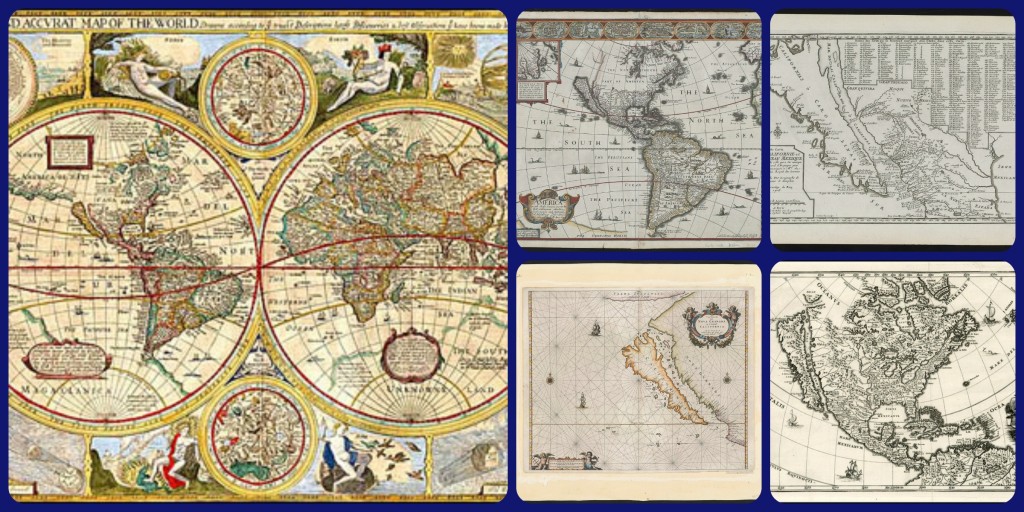 It is always said that hindsight is 20/20. However, that is not always the case when it comes to

cartography. Going back only reveals the many mistakes that were made throughout the years. It

is amazing to see how long a lot of them were propagated. Some lasted for centuries. It makes you

chuckle and smile to see what we once thought the world looked like. There have been some pretty

epic blunders throughout the years, for sure. Yet, perhaps none of them take the cake quite like the

Island of California. That’s right, at one time California was thought to be an island all to itself, floating

just off the coast of North America. Thanks to Stanford University’s recent acquisition of “California

Island” maps from Glen McLaughlin, we have a lot of insight in to the way California becaome

If you go back to maps published in the 17th and 18th century, you will see a landmass known as

California that is indeed separate from the rest of the North American continent. It was a myth that was

widely circulated as reality. According to the Stanford University Library’s Digital Collection Report,

The first mention we have of the island comes from Garci Rodriguez de Montalvo. His work, “Las

Sergas de Esplandian”, published in 1510, had California rendered as an island. The myth surrounding

to dine on the surplus male population.

The island state was also said to be riddled with gold. All a person had to do in order to get the gold

was reach it’s shores and conquer the fierce warrior women. This all came purely from Montalvo’s

imagination, however, what was once myth would soon become cartographic reality. Even though

California was depicted as a peninsula in some maps during the 1500s, the myth prevailed in the

end. There were a few reasons for this, but most of them have to do with one event in particular… the

of the island into the maps of reality for many years. The reasoning is simple. From their exploration,

the Spanish declared that California was indeed cut off from the rest of the mainland. Now that

the myth was validated, they began to produce maps depicting it as such, but they were not widely

circulated as of yet.

No, these maps were kept as state guarded secrets to protect Spanish exploration interests. The less

other countries knew about the island’s topography, the better. However, like all good things, the

closely guarded secret maps came to an end too. According to legend, some Dutchman raided a

Spanish vessel one day and found some of the secret maps depicting California as an island. Once they

returned it to Amsterdam, the myth and geography were widely circulated. It seemed like the island of

California was in full bloom.

separate from the coast of North America. The Spanish state secrets had been discovered and now the

whole world could catch a glimpse of the typography and resources that the Island of California held.

Spain was angered and outraged at the discovery… or were they?

with. The earliest maps from the 16th century show one continuous coastline, however, a humble

Carmelite friar, known as Antonio de la Ascension is known for his drawing the map that would

confirm the earlier myth purported by Montalvo. Ascension accompanied Sebastian Vizcaino on the

making a few assumptions, his California Island map was produced around the year 1620.

Many of these were produced after that and we’re Voyages and Such. Now, fast forward to the mid to

late 1600s. When the dutch captured the Spanish ship and absconded the maps to Amsterdam, it looks

like they had made away with some great state secrets. However, in a piece put out by Business Insider,

Stanford library fellow Rebecca Solnit suggests that this is exactly what the Spanish wanted. She quips

that Spain knew California was not an island, yet thought it would be in their best political interest if

every one else thought that was the case.

That might not seem like such a huge obstacle to overcome, yet think about it this way. If you are

looking for an island and find yourself standing at the edge of the ocean, your only option is to go back

to your home country and find a voyage to sail west further towards this supposedly Island. This would

be costly and in the end, the vessels would keep sailing towards Hawaii and possibly even Russia

depending before they hit land depending on how the currents drifted. Meanwhile, Spain could keep

all of the resources that California had to offer as their own. Knowing where to go and what to explore

would be valuable in the end if they could keep other countries away.

once again. King Ferdinand VI of Spain issued a royal decree declaring, “California is not an island”.

You would think that would be enough to settle the matter entirely and life would go on from there.

However, this was well before the days of fast communication so the rest of the known world was a bit

slower to catch up.

Most maps cleared up the matter by the early 1800s, yet there were a few that continued to hang around

for a while. Asian maps as late as the 1860s still depict California as an island. It seems that in the map

making world, once a myth is validated, it takes a while for those lines to be erased even though the

case has been proven otherwise.

The same thing happened with the Pacific Ocean. Early explorers mistook the mouth of the Hudson

within a few days journey. Of course, this notion was dismissed as soon as explorers discovered

otherwise. It was easier to erase then the California Island myth, but it did take some time.

As for California though, it is intriguing to see how something that is assumed can become reality

so quickly. Following the daisy chain from the 1500s with Montalvo’s proclamation of the Island of

California, to Ascencion’s map produced in 1620, then verified by British mathematician Henry Biggs

an island, it is no wonder that for more than a century, the face of European cartography was changed.

through the Sea of Cortez. His report cast a wide shadow of doubt of the fact that California was in

island. It was shortly thereafter that the King declared it so in 1747. Slowly and unwillingly, California

began its slow century-long journey back to the mainland.