Lauren Monroe Jr. spent his formative years on a Blackfeet Reservation just north of Browning, Montana, where he is an enrolled member of the Blackfeet Tribe. He was raised by his grandfather who was a sculptor in his own right, and whom Lauren had the opportunity to learn from as a boy. While Lauren had an artistic background, he never developed a serious interest in art until he left home for college. One day on campus at the University of Montana-Missoula, he felt the need to paint; he went to the bookstore and purchased supplies, and later went back home to the reservation and started painting. Lauren’s art took off from there and has been growing ever since that time. This self-taught artist gets his inspiration from Blackfeet culture and history and his personal experiences. 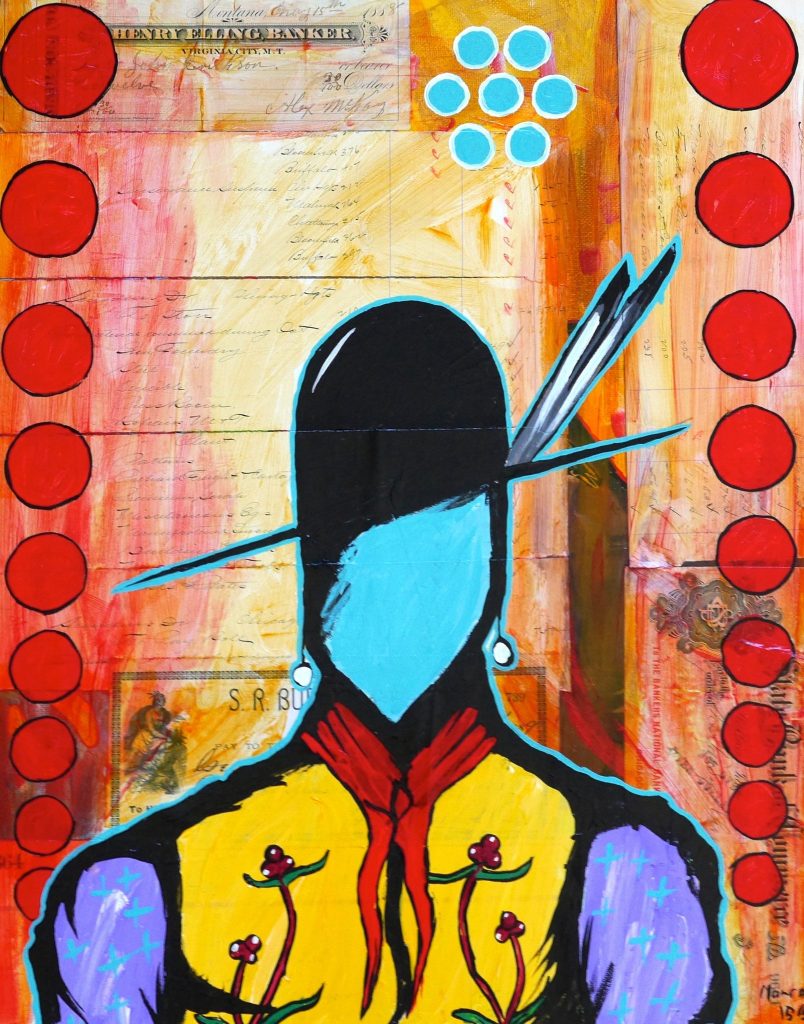 He predominantly paints with acrylics, reflecting Blackfeet cultural motifs and imagery. Lauren’s paintings are abstract and contemporary in nature, yet are rooted in his traditions. Featured in many of his paintings are animals of the Great Plains, such as bison, ravens, and horses, while others have faceless people in traditional clothing. His work comes alive with classical Native American primary colors: bright reds, yellows, and blues. Brick red, turquoise, as well as goldenrod, are used to create art that is embellished and surreal, and in many instances, forces the viewer to ponder about its significance. Inasmuch as Lauren’s art is about Blackfeet cultural motifs, it is also about his personal experience living and growing up on the reservation. He mixes it with his own unique style and sense of self. His darker paintings, which are a contrast to his colorful pieces, are examples of how Lauren paints for himself as an artist.

Painting for himself as an artist, and the need to keep Blackfeet identity visible in a modern world are the main reasons Lauren paints. He stated, “I want to keep parts of my own culture alive and let people know that we are still here, and are still making things, however small it may be.” Lauren hopes to also inspire young people to embrace their creativity even as they honor their traditions. Continuing on his path of cultural and personal expression through his art is something that Lauren is fully committed to, and he seeks to grow as an artist. When he is burnt out from painting, Lauren is hiking, fishing, or creating inspiring screenplays.