Flathead Lake, with a surface area of up to 197 square miles, is the largest natural freshwater lake west of the Mississippi River in the continental United States. The lake is roughly 27 miles long and 15.5 miles wide at its widest point. It has an average depth of 165 feet, but a maximum depth of 370 feet. It is reportedly one of the cleaner lakes of its size and type. 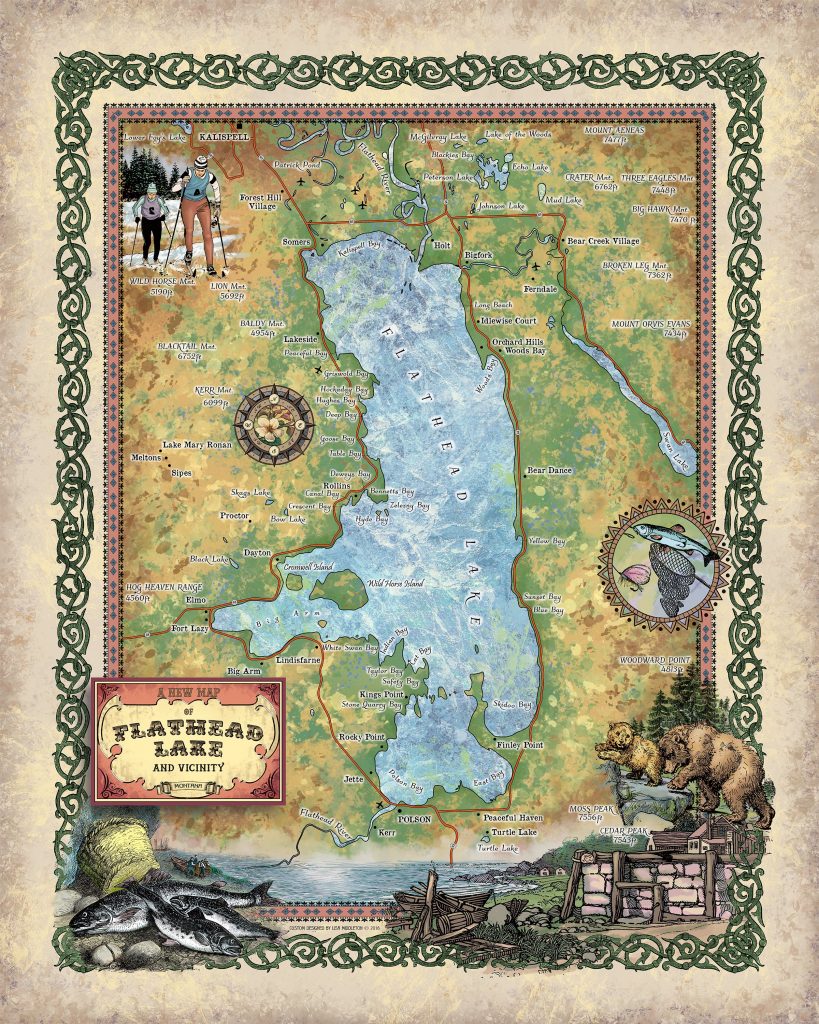 The ancient glacial lake, Lake Missoula, once sat in this region. When the glaciers melted and most of the water flooded into the valleys to the south and east, the area of Flathead Lake was dammed by the end of glacial moraine, a collection of debris in the form of silt and rock frozen together, located in Polson at the southern point of the present day lake. Though a lake dammed by a moraine may drain as water finds its way through the moraine, Flathead Lake has a bedrock hill underneath the moraine which prevented all of the water from Lake Missoula from draining. When the glacier was still present in the lake, the level of the water was nearly 500 feet higher than it is now and the lake drained through the Elmo valley to the west of the lake. Now, the lake drains through Polson, Montana, into the Flathead River which is the headwaters for the Columbia River. It’s main sources are the Flathead River and Swan River in the north near Bigfork.

The lake is bordered by the Mission Mountains on the east and the Salish Mountains in the west. The glacially formed Flathead valley stretches to the north and south. It provides a climate suitable for fruit trees and even for some vineyards to the west. The Salish Indians, which initially provided the name for the lake, now reside on the Flathead Indian Reservation which borders the southern half of the lake. Though they did not practice head alteration as some of the indians in the area did, they were referred to as Flatheads by neighboring Columbia River tribes who practiced head shaping.

The Salish traveled east towards the lake from the west coast and encountered the Kootenai tribe which had already been in present-day Montana and Idaho. These tribes and their ancestors, along with the Pend Oreille, are thought to have lived in the area for many thousands of years. A treaty in 1855 reduced their aboriginal lands of 20 million acres to a mere 1.5 million acres in what is now the Flathead Reservation, home to the Bitteroot Salish, Kootenai, and Pend Oreille tribes. The confederation of these tribes is concerned with subsistence and conservation and is greatly responsible for maintaining the water quality in Flathead Lake.

As with many of the settled areas of western Montana, the logging industry and the building of the railroads were important aspects of the region̢‰â?ã¢s development. Many logs were floated down the Flathead river, across the north side of the lake, and over to Somers where they were milled into railroad ties. Now the lake is a source of recreation for many, as the population of lake trout is abundant. There are several islands throughout the lake, the largest of which is Wildhorse Island at 2170 acres. The name of the island comes from stories of local tribes using the island to care for their horses when raiding tribes were near. The lake is also popular with boaters, and because of its cleanliness, it is reported that you can see quite far down into the calm lake waters. Though the water may be clear, this has not helped in the effort to document the mythical Flathead Lake Monster, said to be of similar shape and size to the famous Loch Ness monster. The first spotting of the supposed giant eel like water creature was by James Kerr and the passengers of his steamboat U.S. Grant in 1889. Theories of the monster’s origins abound and sightings continue to this day, though only one or two people a year actually claim to see it.