Compiled between 1909 and 1910 from his original 1688 map, which was based on a lost map drawn up by René-Robert Cavelier La Salle, Jean-Baptiste-Louis Franquelin’s map titled “Carte de l’Amerique Septentrionnale, translated “Map of North America,” is a highly significant map depicting the French discoveries and exploration in the region 20 years prior to the map’s creation. Exploration of the New World began with Giovanni da Verrazano in 1524, followed by Jacques Cartier in 1534 and others in the following decades. Subsequently, New France was established in the north, with the settlement of Port Royal in Acadia 1605 and later, with a fort at Quebec in 1608. Franquelin is regarded as the first official cartographer in Canada.

Jean-Baptiste-Louis Franquelin was not only a royal cartographer and hydrographer (1686), but also a teacher of navigation. For a period starting in 1674 to 1708, Franquelin created around 50 detailed illustrated manuscript maps of New France. He was recruited by then Governor of New France, Louis de Buade de Frontenac, who recognized his cartographic talent. Carte de l’Amerique Septentrionnale is a beautiful representation of the French possessions in North America, with a small portion dedicated to pictorial Quebec City.  Did you know that Quebec City is home to world’s longest cantilever road bridge? Known as Quebec Bridge, it has a main span length of 549m, three vehicle lanes, one rail lane and a pedestrian walkway. 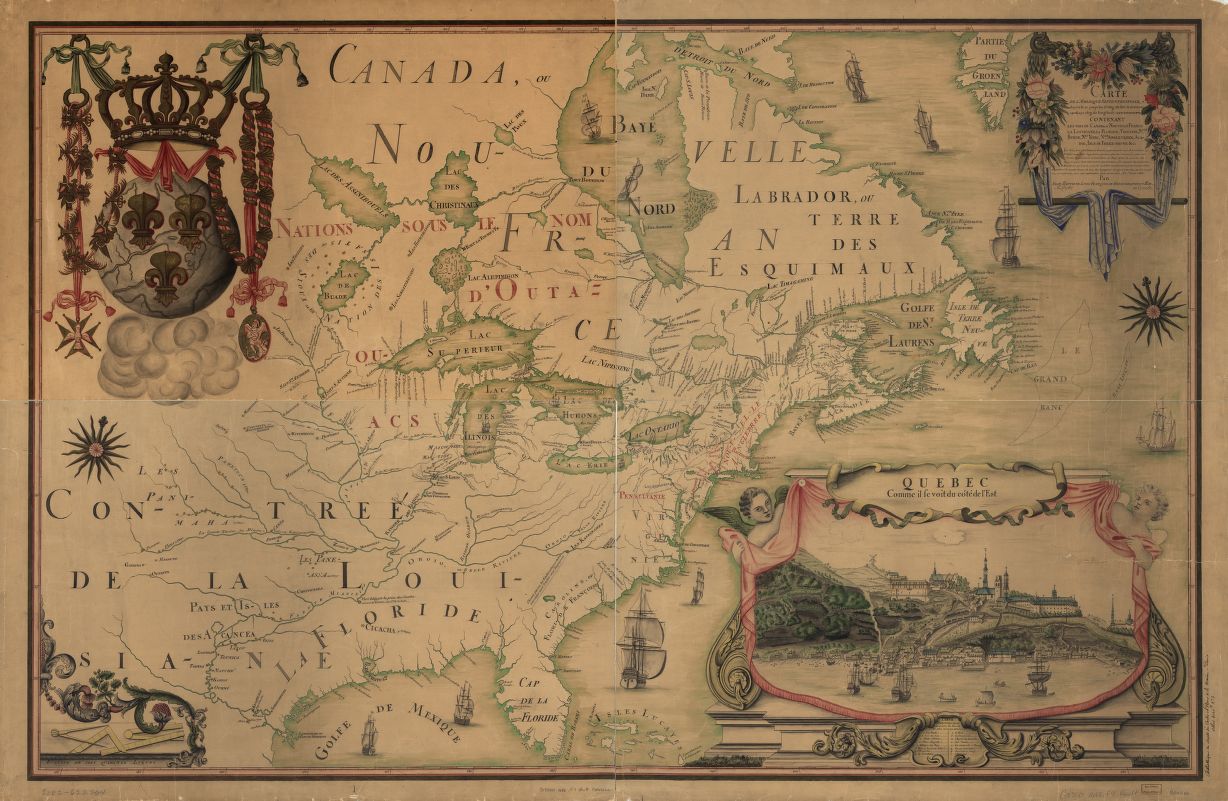 Purchase this map for your own collection here: https://great-river-arts.myshopify.com/products/educational-map-series-carte-de-lamerique-septentrionnale-1910

The map depicts an area stretching from Labrador, Canada in the north, to Louisiana, US in the south. The path traveled by explorers is signified by dotted lines with ships along the course. The French possessions are in great detail in the region of the Great Lakes-Superior, Huron, Michigan, Ontario and Erie, which are fairly accurate in shape and geographic location for this time period, with Lake Michigan labeled as Lac des Illinois.

Represented on the map is the practice of the French to group all Anishinaabe peoples in the west (Ojibwe, Ottawa, Potawatomi, among other) under the name Outouais or Outouacs, hence Nations sous le nom d’Outouacs, translated “Nations under the name of Ottawas”. Major rivers and cities, forts, islands and missions are identified in the regions of French Canada and America alike. The purpose of this map was to identify in much detail the French territories in North America, which would prove useful in disputes that aimed to challenge the French’s claims.

Purchase this map for your own collection here: https://great-river-arts.myshopify.com/products/educational-map-series-carte-de-lamerique-septentrionnale-1910