The America, Noviter Delineata map, published in 1622, is the work of Jodocus Hondius (1563-1612) and Jan Jansson (1588-1664). Jodocus Hondius, also called “the Elder,” was a Flemish cartographer and publisher, who made a name for himself in Ghent, where he worked as an engraver and globe maker. In 1584, Hondius fled to London during the Eighty Years’ War, where he came in contact with several other prominent cartographers and English explorers. Later, he established himself in Amsterdam and created the Hondius Publishing House, worked with Cornelius Claesz, publisher of nautical charts and bookseller and reproduced and expanded Mercator’s Atlas. Jan Jansson was a Dutch publisher and cartographer, who resided and worked in Amsterdam during the 17th century, when it was a hub for the production of maps. He worked with Jodocus, who was his brother-in-law. 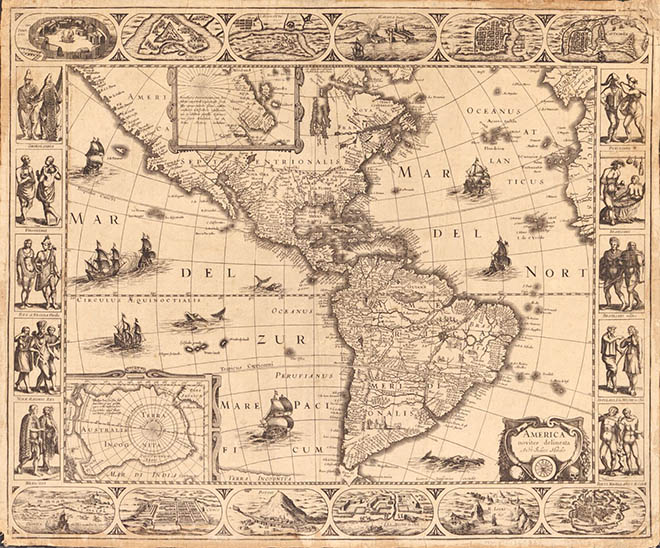 America, Noviter Delineata map was first prepared by Jodocus Hondius Jr. and published in 1618, and appeared in atlases up to 1665. It is surrounded by four panels with figures representing indigenous peoples existing in both continents on the sides and bird’s-eye views of settlements in the Americas on the top and bottom portions of the map. The well-detailed map gives an idea of the magnitude of exploration that had occurred up to that point in time. There are many notable features illustrated on this map, including the depiction of South America, though a bit bigger than its true size, highlighting places like Brazil, Guyana and Peru, along with figures of people–the most notable one being a meeting between Europeans and a local potentate. Also depicted are numerous missions and dozens of place names.

Not entirely accurate in its rendering, California is depicted as a peninsula. North America’s east coast is inaccurately depicted, stretching almost due westward, but it identifies numerous place names, rivers and lakes. Most accurately depicted are Central and South America, while inaccuracies could be a result of information that’s based on guesswork, legend and hearsay. In what could be characterized as the unknown areas are two inset maps; at the furthest reaches of North America is an inset map of the known areas of the Arctic Circle, showing “Groenlan (Greenland) & Iflandia (Iceland),” while at bottom left corner is an inset map of the Antarctic Circle, showing “Terra Australis Incognita” (unknown land of the South). Sea monsters and a fleet of ships are also a part of the decorative elements of America, Noviter Delineata. The map served as a significant reference that provided an understanding of the Americas during the first half of the 17th century and a hint of information on the Antarctic as it was known.