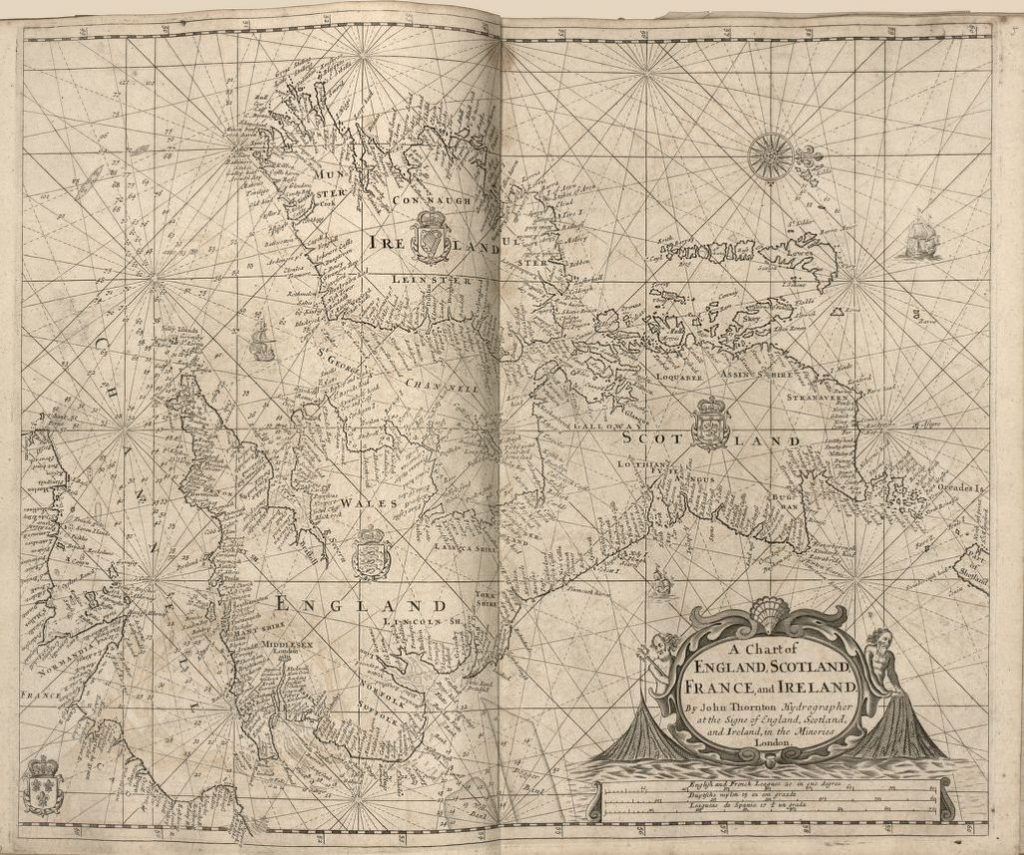 A Chart of England, Scotland, France, and Ireland is the shortened name of a portolan chart that goes by a couple of other names, including “Sea-atlas, Containing an Hydrographical Description of the Sea-coasts of Most of the Known Parts of the World.” It was published in 1700 in London by John Thornton, who was a hydrographer for the Hudson Bay Company and the English East India Company. However, he was more than that. He was a leading English chart maker

Who was active from 1667 to 1708. He became a leading manuscript chart practitioner in the mid-1600s, but later transitioned into printing charts, before entering publishing in the 1670s with a focus on charts. It is believed that the most important of his atlases is the ​‘English Pilot.’

This map is part of a greater body of work- Atlas Maritimus or, the Sea-atlas, which is a book of maritime charts that describes the coasts, capes, headlands, sands, shoals, rocks and dangers, bays, and harbors, roads, rivers, and ports in most of the known parts of the world at the time. An effort was made to present the true course and distances from one place to another based on the newest discoveries that had been made by a diverse mix of capable and experienced English navigators. Within the pages of the atlas is a dramatic sea chart of the United Kingdom and parts of Europe.

In the crowded pages of the atlas, A Chart of England, Scotland, France stood out, thanks to its elaborate appeal and detailed representation of the different regions. The portolan chart has a compass rose as the focal point in the upper-right corner of the map, with a system of rhumb lines(radial lines) covering the chart. Rhumb lines and compass roses aided sailors in plotting their course from one harbor to another and portolan charts showed the spatial relationships between ports. What’s a portolan chart you may be asking? The term portolan is derived from the Italian word ‘portolano’, meaning a written description of ports/harbors along a coastline. The Carta Pisana is the oldest portolan chart on record, which dates from the late 13th Century. These charts are based on directional observation and the personal experiences or observations of sailors.

The chart highlights the provinces in Ireland- Ulster, Munster, Leinster, Connaugh, along with major regions in Scotland, France, and England. While some place names may have changed, the general accuracy of the chart should be noted, taking into consideration the time period in which it was produced and the degree of scientific knowledge that was available. Various depths are shown by soundings, the English Channel is highlighted and relief is presented pictorially. This portolan chart was a useful guide for pilots, as well as merchants who needed to get their ships around the coast of Europe. It helped to make global commerce more accessible.