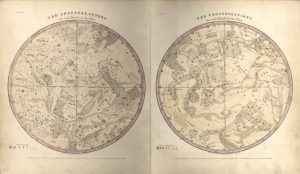 The galactic quadrant encompassing February, March and April showcases a particular constellation, Robur Caroli, among others. Interesting fact: Robur Caroli, now obsolete, was created by Edmond Halley in 1678, commemorating the hiding place (oak tree) in which King Charles II of Great Britain hid after his defeat at the Battle of Worcester in 1651.

May, June and July, all in the same galactic quadrant, feature the constellations Apus, Ara, Circinus, Southern Triangle, Cruz, Centaur and Lupus. Crux is more popularly known as the Southern Cross, and its brightest star is Acrux, a star system consisting of three stars.

August, September and October share a galactic quadrant and is home to the constellations Grus, Toucana, Pavo and Telescopium. Pavo was introduced by the Dutch astronomer Petrus Plancius and made its star atlas debut in 1603.

November, December and January’s galactic quadrant include the constellations Equuleus Pictorial, Solarium, Dorado, Hydrus, Horologium and The Phoenix. Did you know that Solarium is an obsolete constellation? Not a part of “modern” constellations, Solarium first appeared in Alexander Jamieson’s Celestial Atlas of 1822, an attempt to replace Nicolas Louis de Lacaille’s Rectilium constellation.

Many of the constellations that are visible in the north polar region may be more familiar to sky gazers. These include Auriga, Camelopardalis, Cassiopeia, Cepheus, Draco, Lynx, Perseus, Ursa Major and Ursa Minor. Cepheus stands out in a commanding posture as a king, with its brightest star, Alderamin, situated on his right shoulder. Another notable constellation is Cassiopeia, wife of Cepheus and mother of Andromeda, seated on an inverted chair, identified by its 5 brightest stars. Ursa Major, the Great Bear is perhaps one of the most well-known northern constellations, identified by 7 bright stars that form the Dipper.

Constellations create a sense of wonder about the vast night sky, sprayed with sparkling stars that represent stories of mythical creatures, gods and goddesses and astronomical symbols that have cultural relevance for different people in all walks of life.