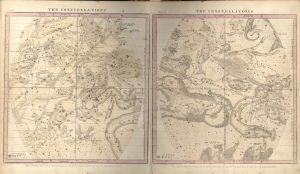 It was in 1922 that the modern-day constellations were recognized by the International Astronomical Union(IAU), and in 1930, Belgian astronomer Eugene Delporte defined the borders of the 88 official constellations, a leap from a simple informal representation and interpretation of the heavens based on the shapes made by their star patterns. Constellations are much more than exquisite astronomical images in the sky. They have different meaning in different cultures, tell amazing stories, and allows for the celestial mapping of the starry sky.

Generally prominent among March’s seven constellations is the famous Cancer, the crab, which is the home of the large, bright Beehive Cluster, also known as Praesepe, and Puppis, the stern, which contains three Messier open star clusters.

Within February’s group of eight constellations, worthy of note are Gemini, the Twins, which have two bright stars known as Castor and Pollux, Canis Major, the Great Dog, and the constellation Auriga, featuring three open clusters. Did you know that Sirius is also known as the Dog Star? Outshining all other stars in the February sky, it can be seen with the naked eye from anywhere on Earth.

Of January’s six constellations, Orion, the hunter, and Taurus, the bull are two of the most popular groups. In Orion is the Orion Nebula, one of the brightest nebulae in the sky, and the famous dark Horsehead Nebula. The famous Pleiades star cluster, also known as the seven sisters is located in the constellation of Taurus.

Aries, Eridanis, and Perseus are three of the eight December constellations. The stars in this group of constellations are relatively dim, with a majority dimmer than the 2nd magnitude. Did you know that the magnitude scale was invented by an ancient Greek astronomer? In roughly 150 B.C, Hipparchus of Nicaea developed the “magnitude” system, still used by astronomers today.

Popular groups such as Andromeda, Cassiopeia and Pisces are found in the November constellations. The spiral Andromeda Galaxy is found in Andromeda and is the largest and brightest galaxy in the night heavens. Cassiopeia showcases two notable open star clusters, while its dwarf namesake galaxy is situated in Pisces.

Aquarius, the water bearer and Pegasus, the winged horse are the two most popular groups of October’s seven constellations. The brightest stars are Alnair embedded in the constellation Grus, the Crane, and Fomalhaut in Piscis Austrinus, the Southern Fish.

Each month has a surprise for star gazers, students or astronomy lovers to explore and enjoy.