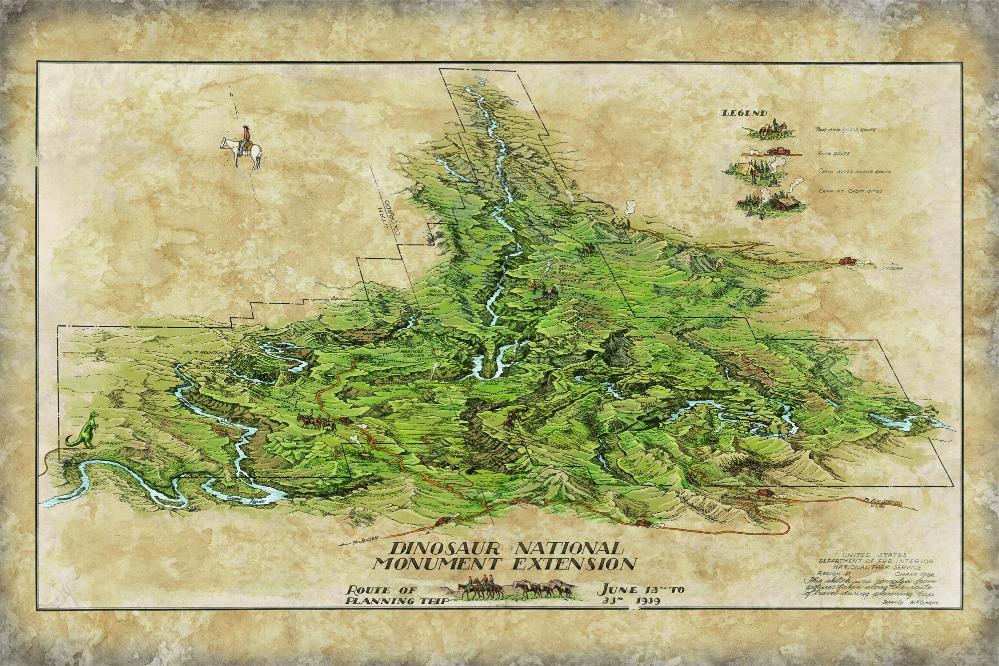 In a land where dinosaurs roamed centuries ago, remains the fantastic relics of their existence, along with a rich cultural history, preserved in the petroglyphs and pictographs left behind by Native American tribes that were inhabitants in the region of northwest Colorado and northeast Utah. This land of dinosaurs is where the Dinosaur National Monument is situated, featuring fossilized bones embedded in rocks. This U.S National Monument is located on the border between Colorado and Utah, at the confluence of the Green and Yampa Rivers, and comprises 325 square miles of mountains, desert, and untamed, deep canyons of spectacular geological formations. There are some 800 paleontological sites at the park, with notable dinosaur fossils, which includes Allosaurus, Deinonychus, Stegosaurus, Camarasaurus, and Abydosaurus.

Paleontologist Earl Douglas is credited with discovering the dinosaur fossil bed in 1909, when he was on a quest for fossils for the Carnegie Museum of Natural History. Thousands of fossils were excavated and transported to the museum’s location in Pittsburgh, Pennsylvania by Douglass and his crew, where they were studied and put on display. Six years after unearthing the prehistoric plant and animal fossils, President Woodrow Wilson declared the dinosaur beds as a Dinosaur National Monument on October 4th, initially preserving 80-acres in the quarry area. In 1938, there was an expansion of the boundaries of the monument to 200,000 acres in Utah and Colorado, from the original 80-acre tract surrounding the dinosaur quarry in Utah.

Built in 1957, the Quarry Exhibit Hall has over 1,500 fossilized dinosaur bones exposed on the cliff’s interior face, often called “the wall of bones, including an exhibit showcasing an 80-foot long mural, which tells an important story of these dinosaurs that lived during the late Jurassic period, along with several interactive stations, where visitors can touch 149 million year old dinosaur fossils, belonging to different species of dinosaurs. Tour of the Tilted Rocks extends for 10 miles, one-way, along Cub Creek Road, and is a scenic auto tour route, featuring petroglyph and pictograph panels, Josie Bassett’s cabin built in 1913, and incredible views of geologic formations, including colorful ridges, plateaus and canyons surrounding the Green and Yampa rivers. The informative exhibits at Dinosaur National Monument offers a glimpse into a past of magnificent creatures, along with a cultural history that is etched into aged rocks that continues to tell a great and exciting tale.