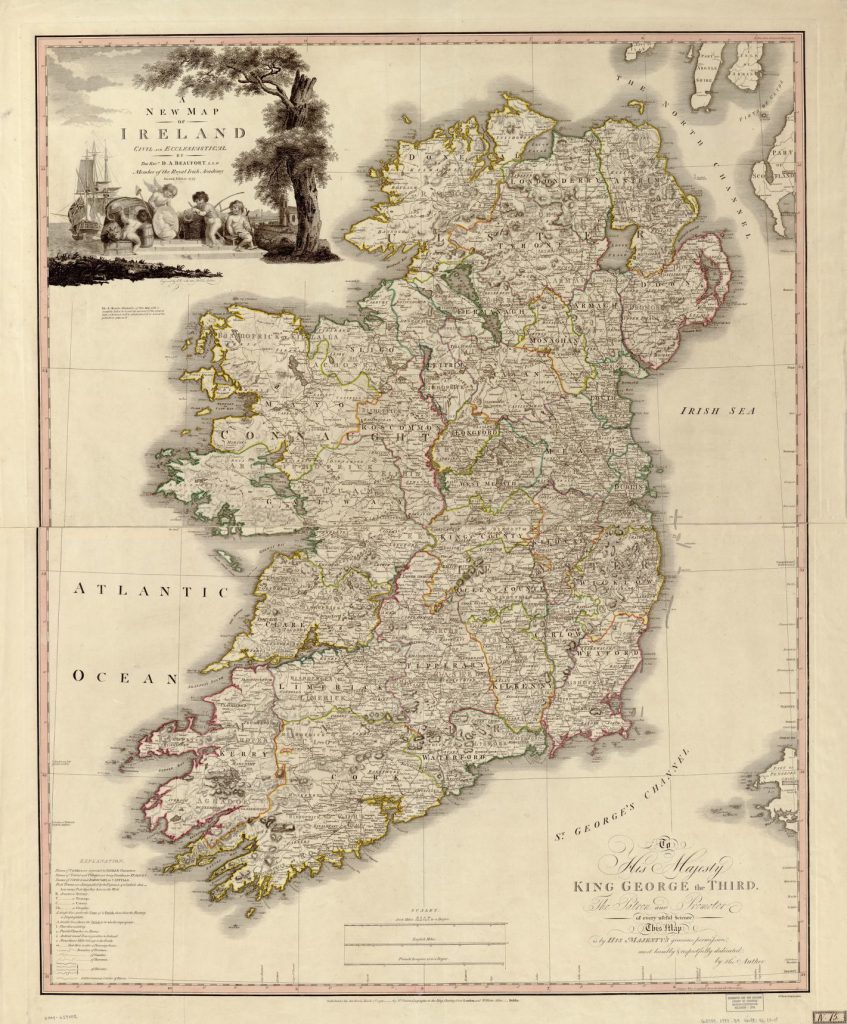 The mapping of Ireland during the 16th and 17th centuries reflected a period of political and religious shifts that shaped the territory. However, it also showed the cartographic advancements of the time, evident in increased accuracy and precise geographical information. This collection of Ireland maps feature the works of cartographers including, Map of Ulster Province, Ireland, Baptista Boazio’s Irlandiæ c. 1606 = Irlandiæ accvrata descriptio, Ortelius Improved, or a New Map of Ireland: Wherin are Inserted the Principal Families of Irish and English Extraction, Who Possess’d that Kingdon[sic] on the Commencement of the Seventeenth Century, and Hiberniae,‌ ‌Britannicae‌ ‌Insvlae‌ ‌Nova‌ ‌Descripto‌‌. These four historical maps are representations of Ireland published in different years, each offering a different perspective of Ireland while bearing some similarity.

Map of Ulster Province, Ireland, was published in 1880 and provides a picture of Ulster as it was in 1880 when the Home Rule movement was making waves in Ireland. Baptista Boazio’s Irlandiæ c. 1606 = Irlandiæ accvrata descriptio was published 1606 and provides a detailed look at Ireland, expanding on the geographical knowledge of the past, with a reliance on science and an emphasis on accuracy. Ortelius Improved, or a New Map of Ireland…., published in 1795, offers a look at Ireland as it was at that time, with indications of land ownership, evident in the numerous family names labeled on the map.‌ Abraham‌ ‌Ortelius‌’ early ‌map of Ireland,‌ ‌‌Hiberniae,‌ ‌Britannicae‌ ‌Insvlae‌ ‌Nova‌ ‌Descripto‌‌, was published‌ ‌in‌ ‌1598 and captures Ireland in great detail while demonstrating advancements in mapmaking during the 16th and 17th centuries.

All four maps hint at a changing Ireland, with particular emphasis on land ownership and the changing political landscape. These are recurring themes in each map, whether direct in its illustration or subtle. There’s also a focus on the Province of Ulster which was the epicenter of land conflicts in Northern Ireland. A shift in land ownership from Catholics to Protestants in Ireland significantly shaped the landscape of the region. In the 16th and 17th centuries, the English Crown confiscated Catholic Irish-owned lands and placed them in the hands of English Protestants.

Looking at these maps, one realizes that their flaws do little to draw from their function, which is perhaps to provide an overview of Ireland that was not represented anywhere else as it did in the time the cartographers produced their illustrated version of the region. As a result, the maps were also significant political and scholarly references. This collection of maps of Ireland are more than just footnotes in the world of cartography.