Arnoldo di Arnoldi’s map, simply titled Africa was published in Siena, Italy in 1600 by Matteo Florimi, an Italian print seller, book dealer and publisher. Arnoldi was a Flemish artist and cartographer, who, at the end of the 16th century, carried on his work in Bologna and Siena. He was the leading engraver and mapmaker in Italy during the early part of the 17th century, and created two exceptionally rare world maps and a set of maps of the four continents as they were known at the time. This map of Africa is from that set and is believed to be a school map, cartographically derived from Abraham Ortelius’ 1570 map of Africa. It is also described by some as the rarest of his four continent maps, seldomly appearing on the map market. 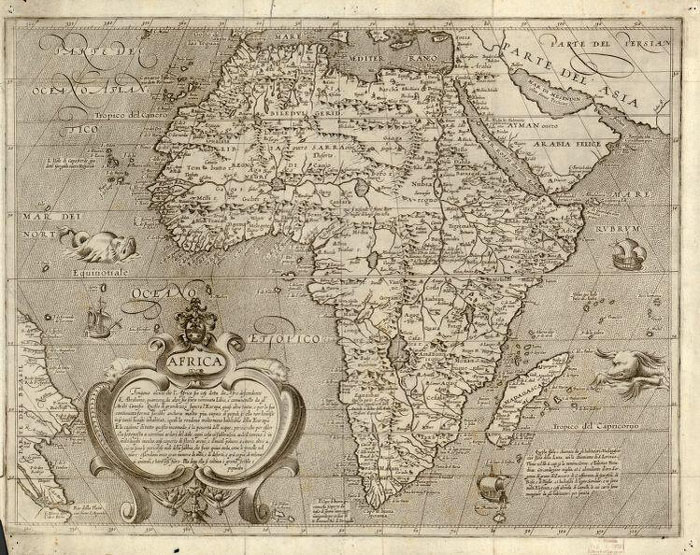 The continent of Africa is depicted in full on this map, and also captures the adjacent Arabian Peninsula, which is modern day Saudi Arabia, along with the Atlantic and a portion of Brazil. In the lower left quadrant is a beautiful title cartouche with a long textual annotation in describing Africa, with emphasis on its inhabitants, like strange beasts, and highlighting how it’s much less habitable than Europe. The map displays two large, ferocious-looking, reptilian, sea creatures, one on the left side, close to the equator and the other on the right, near the Tropic of Capricorn, perhaps an indication of the dangers lurking in unexplored waters. Three sailing ships are illustrated in what could be ports in the various regions.

There is armorial crest, situated over the cartouche, with a two headed dragon, which is believed to have been an identifiable mark of an Arnoldo di Arnoldi’s map. On the map, Zanzibar appears on the west coast of Africa just south of the Congo, while the Nile follows the Ptolemaic model drawing its waters from Lake Zember (Lake Zaire) and Lake Zaflan. There are plenty of annotations throughout the map that describes particular places, along with historical discoveries. Africa’s interior is not as detailed as its coastal regions, a reflection of the lack of exploration that far inland. The purpose of this map may have been to provide knowledge of the Africa, particularly its coastal regions, where trade occurred and Italian merchants ventured.