An early map of Africa, Totius Africæ Accuratissima Tabula, is believed to have been published in Amsterdam in 1688 and is the work of Fredrik de Wit. Who was Fredrik de Wit? Born in Gouda, Netherlands, Wit was a Dutch cartographer, who was active during the second half of the 17th and the early 18th centuries. He worked under Willem Blaeu in Amsterdam, where he resided in the 1640s, and also established his own publishing shop, where he published atlases and was known for his Dutch town maps. This mapmaker and map-seller’s first chart, which he personally drew and engraved, was perhaps his 1659 map of Denmark, and the following year, her created a great wall map of the world, his most famous work, Nova Totius Terrarum Orbis Tabula. 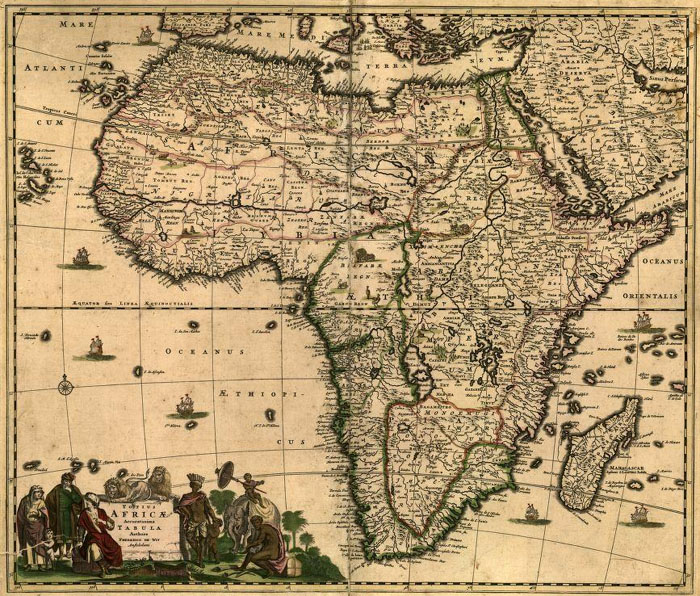 This map of Africa was instrumental as the standard map for subsequent maps of Africa, and over the next 30 years after its publication, others replicated the Totius Africæ Accuratissima Tabula, with minor alterations. The map appears to cover all of Africa, along with portions of Arabia, the Atlantic, Indian and Mediterranean. It is considerably detailed with hundreds of place names, covering countries and cities, along with lakes, mountains, deserts and many rivers. It is said that much of the detail on the interior is based on imaginary information since exploration of those regions did not begin until the 1800s, while the Nile follows the Ptolemaic model.

The decorative cartouche, present in the lower left corner of the map, features humans- who appear to be Moors (perhaps merchants) and native Africans, including a tribal chief, as well as lions and an elephant. It appears as though the natives are trading ivory for goods with the Moors. The Nile follows the Ptolemaic version and the source of the Niger River is shown to be Borno Lacus, rather than the Guinea Highlands in southeastern Guinea. The Atlantic is identified as Oceanus Aethiopicus, sometimes referred to as Ethiopian Ocean, or the African Sea. The map also displays several creatures, in a similar way that a mappa mundi does, likely indicating the dangers that could exist in the unknown territories. The compass rose is also evident in the region of the Atlantic Ocean.

The map likely served to show Dutch exploration and expansion into Africa and the sailing routes taken to reach certain regions of the Continent. The Totius Africæ Accuratissima Tabula was an ambitious work regardless of its flaws