This mid-17th century map, Africae Nova Tabula, created by the Dutch cartographer Jodocus Hondius (1563-1612), is a beautiful decorative map of the continent of Africa, and was published in 1640 in Paris by Chez Iean Boisseau. Jodocus Hondius established himself as one of the most prominent geographers and engravers during the 17th century. Amsterdam was revered as the center of cartographic publishing during that time, thanks to his work. He was raised in Ghent, where as a young man, he worked as an engraver and globe maker. Nearing the mid-1580s, Hondius relocated to London, where he worked with cartographer Edward Wright and publisher Richard Hakluyt, and in the early 1590s, he engraved the globe gores for Emery Molyneux’s pair of globes, plotting the coastlines. His connection to prominent navigators, like Thomas Cavendish and Walter Raleigh, gave him access to manuscript charts and descriptions, which he used to produce engraved maps. Upon his death in 1612, Hondius’ sons, one, his namesake, and another Henricus, took over the atlas business. 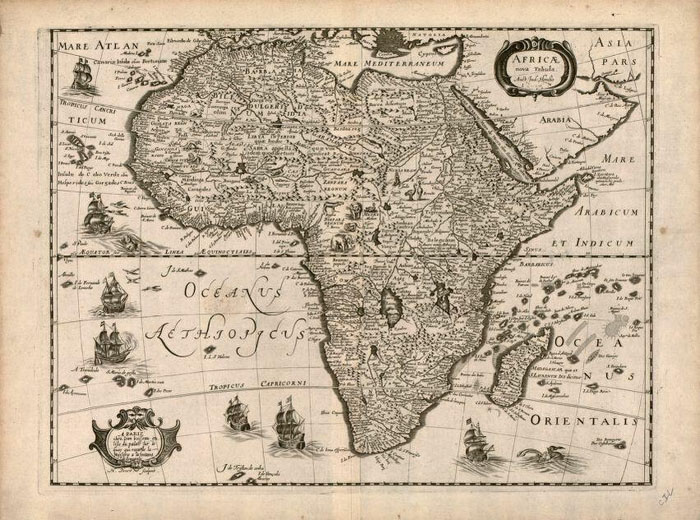 What do we know about this map? Jodocus Hondius’ map is titled in Latin, Africae Nova Tabula, which translates (New Map of Africa). The original version of this remarkable map was produced in 1619 as a set of four continent maps by Jodocus Hondius Jr. (1593-1629), who drew from the earlier work of his father, who charted Africa in 1606. A significant portion of the coast of Africa was mapped by Portuguese navigators on their voyages of discovery in the 15th and 16th centuries. Much of the interior was still unknown and inaccurately mapped. The southern Atlantic Ocean is labelled Oceanus Aethiopicus, (the Ethiopian Ocean), while the Indian Ocean is named ‘Oceanus Orientalis’ (the Eastern Ocean). This 1640 copy was produced in Paris by Hugues Picart and Jean Boisseau.

Other notable features on this map includes the depiction of the Kingdom of Monomotapa, located entirely on the southern tip of Africa. Also known as Mwene Mutapa, and Monomotapa was situated between the Zambezi and Limpopo rivers, in current-day Zimbabwe and Mozambique. Monomotapa was also a title of kings that ruled from the 14th to the 17th century. Throughout the map are numerous sea creatures, flying fish and seven decorative sailing ships, along with fictitious rivers and mountains. The Nile conforms to the typical 17th century cartography that draws on the Ptolemaic assumption of the twin parallel lakes as its source. The purpose of this map may have been to offer a fuller picture of the world by illustrating the continent of Africa as it was believed to be.