Titled “Portolan Atlas of the Mediterranean Sea, Western Europe and the Northwest Coast of Africa” by a cataloger, Catalan cartographer Joan Oliva is believed to be the mapmaker behind the creation of this portolan chart created in Italy in 1590. This chart, which represents the [Eastern Mediterranean] is one of five portolan charts in the collection under the aforementioned title. 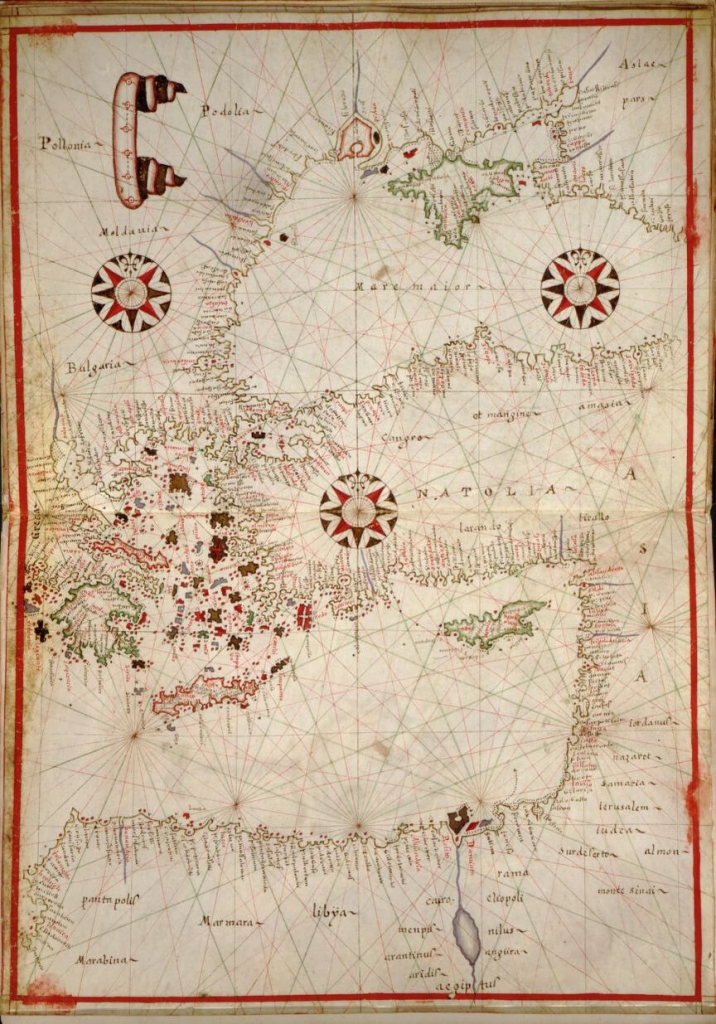 The other portolan charts are of the Central Mediterranean, Western Europe and the British Isles and Northwest Africa and a World map drawn on an oval projection.What do we know about Joan Oliva? He has his origin in a large family of prominent hydrographers that dominated portolan chart making in the western Mediterranean for more than a century. This is evident from signed portolan charts attributed to at least sixteen different members of the Oliva family recorded between the years 1538 and 1673. The Oliva name is associated with charts of the Mediterranean world, with some originating in places like Naples, Majorca, Palermo, Messina, Malta and Marseilles, among other regions. Joan was active in the cartographic world from 1580 to 1615 and was one of the most notable and highly regarded of the prolific Oliva family. His earliest charts are believed to have been created in Messina, Italy, but is cartographic works are scarce, with a few atlases in a private collection in Majorca, and another atlas in the British Library, United Kingdom. This rare portolan chart by Joan found in an atlas at the Library of Congress is an great illustration of his work.
The elaborate chart has a compass rose as the focal point, with a system of rhumb lines radiating from the center in the direction of the compass points. Sailors had difficulty accurately measuring longitude and so rhumb lines provided a way for them to chart their course on the high seas. Two other compass roses sit above the one in the center with radiating rhumb lines, but there are numerous rhumb lines that do not radiate from any compass. This could have been on purpose or a lack of space for adding additional compasses in all the regions. Major port cities are highlighted in red along the coastlines, a decorative banner is at the top, and the details in the compass roses all make the nautical chart much more than just a navigational tool.
As a result of its decorative appeal, this portolan chart may not have been created solely as a functional tool for sailors, but could have been something of an art piece for a wealthy patron. Still, this chart was a useful guide for merchants who needed to get their ships around the coast of western Europe and the northwest coast of Africa