Issued by the General Food Corporation in 1934, the work “Authorized Map of the Second Byrd Antarctic Expedition” is a fascinating, colored pictorial map that focuses on the exploration and discovery of Antarctica and Richard E. Byrd’s role in the adventure. Byrd was an explorer and naval aviator, who became a pioneer in navigating long distances on water and in the air. In the mid-1920, he gained notoriety as the first man to fly to the North Pole. He was interested in testing navigational equipment in extreme climates, which ultimately took him to Greenland in 1925. In 1928, Byrd set out on his first expedition to the Antarctic and his second expedition during the winter of 1934, operating Advance Base, a meteorological station. 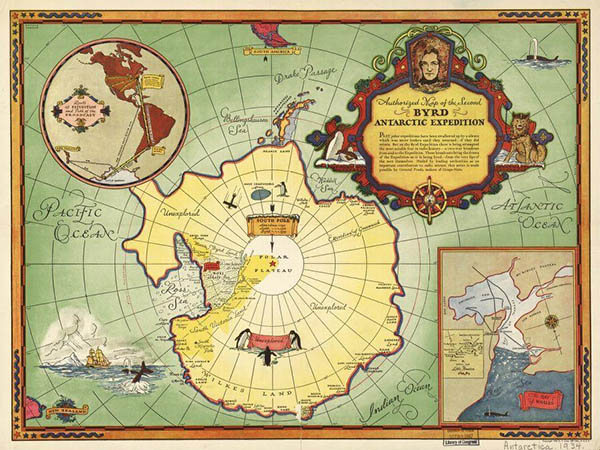 The map depicts the second Antarctic expedition of Byrd, that shows the South Polar Region, which includes the southern tip of South America and the eastern tip of New Zealand. Labeled are the explored regions of Antarctica, primarily along the coast and the Ross Sea, as well as the vast unexplored regions. The Byrd Expedition was attempting what’s described on the map as “the most notable feat in radio history – a two-way broadcast to and from the Expedition. These broadcasts bring the drama of the Expedition as it is being lived – from the very lips of the men themselves.’ The beautiful cartouche in the right corner of the map features a portrait of Byrd himself and throughout the map are figures of spouting whales, penguins and a frigate in the left corner plies the waters at full sail. Also shown is also a list of explorers from 1911-1929, who have explored the South Pole.

In the lower right quadrant of the map is an inset map of the Bay of Whales, depicting the Ross Sea and important topographical features of that area, like the Low Barrier, Sulzberger Peninsula and McKinley Plateau. Within this inset map is a smaller map of ‘Little America’ that highlights places such as a medical shop, administration building, observation tower and radio tower. In the upper left quadrant, an inset depicts the ‘Route of the Expedition and Path of the Broadcast’, the probable route of Byrd’s ship, a banner showing ‘Long Wave Transmission throughout the United States.’ The map alludes to the early beginnings of corporate funding of radio broadcasting, but also served as an advertising tool for General Foods Corporation and the possible advancement of radio broadcast on the horizon.