The Rand, McNally & Co.’s Alaska map is the work of Rand, McNally and Company, published in Chicago in 1878. It is from the Rand McNally & Co’s Business Atlas that contains large-scale maps of the territory of the United States, the provinces of Canada, West India Islands, a list of counties and towns, lakes and rivers, and islands, along with a complete reference map of the world and reference index, showing in detail the entire railroad system of North America. Rand McNally and Company became a prominent publisher of maps and atlases in Chicago in the 1870s when it expanded from printing into publishing, introducing business directories, railroad guides and a newspaper featuring illustrations. Moving into the 1880s, the company maintained its prominence and ventured into educational publishing, offering globes, maps and geography textbooks. 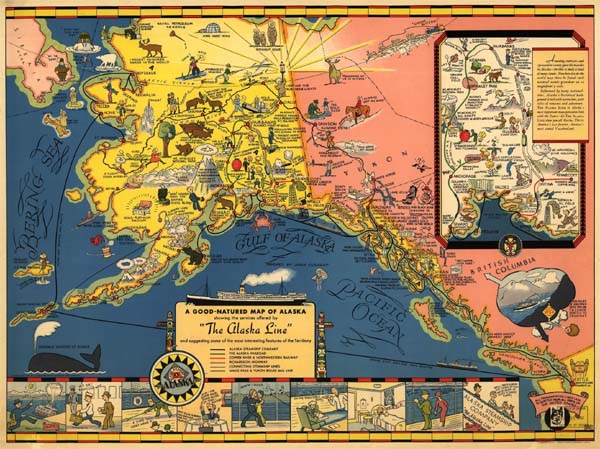 How did Rand, McNally and Company came to be? In 1856, William Rand opened a small printing shop in Chicago’s Loop. In 1858, Andrew McNally, an Irish immigrant took a job in Rand’s printing shop. Ten years later, they formed a partnership and established Rand, McNally & Company, taking over the Chicago Tribune’s printing shop. In 1869, Rand, McNally & Company published the first railroad guide-the Western Railway Guide. That same year, the business was dealt a blow with its destruction in the Great Chicago Fire. In 1872, Rand and McNally’s namesake new business was opened. Chicago was the hub of the American railroad system in the last decade of the 19th century, and during that time, Rand, McNally & Company incorporated the most efficient and up-to-date railway routes into the mapping of America, which they published in their railroad publications.

This Rand, McNally & Co.’s Alaska map shows the Demarcation Point situated in longitude 141 degrees west, which establishes the boundary between British and the former Russian territories. Throughout the map are the names of numerous islands and Native American villages, along with topographical features like rivers, lakes and mountains. An unexplored region South of the large Yukon river is also identified, an inset of the Aleutian Islands is included at the top right corner and the “supposed course of the Tananah R” as derived “from Indian Reports” is also shown. Cape Prince of Whales in the westernmost part on the Seward Peninsula is said to have been named in 1778 by Captain James Cook, presumably for the Prince of Wales.

The significance of this map perhaps lies in its detailed mapping of the Alaskan territory, which served as a useful reference and helped to pave the way for the creation of the first Alaska Railroad in 1903.

This map is a special treat.We love the natural colors of the old maps too. It will be shipped as pictured, or as a hand-painted original with Lisa’s artistic touches and restoration.