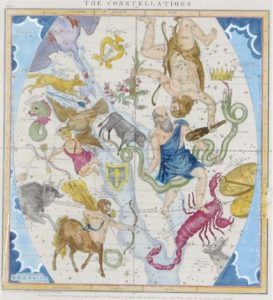 Eighteenth and 19th century technologies transformed the way the night sky was observed and led to the discovery of celestial wonders, from stars, galaxies, meteors, moons, planets and comets, to nebulae. The result was, in part, the creation of celestial maps that showed an exponential number of stars in the heavens, adding to the awe of a sphere millions of miles in space. Star atlases became a way of conveying information about the heavens, and Elijah H. Burritt’s 1856, “Atlas Designed to Illustrate Burritt’s Geography of the Heavens,” edited by Hiram Mattison and published by Mason Brothers, New York, does just that by emphasizing the most visible stars in the night sky. It is a 6-chart atlas that illustrates the mapping of the stars and features the constellations prominently and in great detail. The first edition was published in 1833, and later, several editions of Burritt’s atlas were produced and thousands of print copies were sold over a generation. 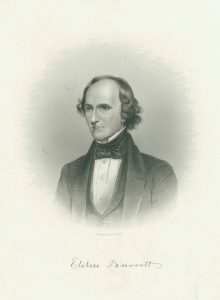 Who was Elijah Burritt? While little is known of his early life, the man behind this incredible book of star maps was born in 1794, the son of a farmer and shoemaker. In 1817, he became  a schoolteacher, and a year later, he published his first book, titled “Logarithmick Arithmetick.” However, his most important work was the “The Geography of the Heavens” and it’s accompanying “Celestial Atlas,” which sold for a little over a dollar in 1833. Included in the 1856 edition are the constellations for each month, the South Pole and North Pole constellations, the planets’ relative magnitude and detail about the stars, clusters, comets and nebulae associated with various constellations. The names of each constellation are given, outlines of the figures that the constellations are named after, along with the brightest stars (some identified by name) found in each.

As a learning tool, “The Geography of the Heavens” was created to be a low-cost alternative to celestial globes that were generally pricey for schools to afford at the time that this work was published. It offered a new way of teaching astronomy, serving as a tool to guide the practice of naked-eye astronomy-unaided eye observation of the sky. By utilizing Burritte’s celestial maps, students learned about the stars by directly making their own observations, easily locating and identifying the constellations and other heavenly objects along the way. “The Geography of the Heavens” was popular during its time and was recognized by educators for its role in simplifying and promoting astronomy.

Join us the next three weeks as we explore Celestial charts! 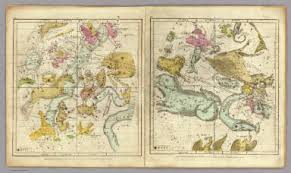