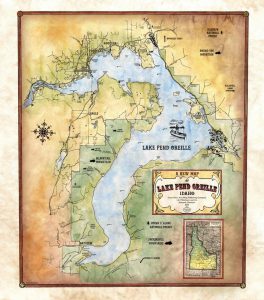 Lake Pend Oreille is the largest lake in the northern Idaho panhandle and the largest lake in Idaho with a length of 43 miles and a surface area of 148 square miles. It is the fifth deepest lake in the United States with a depth of nearly 1,150 feet. Deeper than even Loch Ness, some locals have rumored the existence of a sea monster rivaling its Scottish cousin named the Pend Oreille Paddler, though it is likely just a giant sturgeon. Though the lake has a large 111 mile shoreline, most of it remains unpopulated.
The lake is surrounded by three mountain ranges, the Couer Alenes in the south located in the Couer Alenes National Forest, the Cabinet Mountains in the North, the Green Monarchs to the east located in the Kaniksu National Forest, and the Selkirk Mountains to the north and west. This places the lake at the southern end of the Purcell Trench, a glacially formed valley that reaches northward into Canada. The lake itself was formed by a glacier moving and melting southward from Canada through the trench. The path of the Missoula Flood, a calamitous ancient flood, is believed to have passed through the area from the easternmost point of the lake which had massive geological effects on the region. The lake is now fed by Clark Fork River, named for the famous American explorer, and the Pack River and drains via the Pend Oreille River which runs into Washington State.
Canadian fur trader and explorer David Thompson, known as one of the most prolific land geographers and map-makers of his time, founded a trading post in what is present day Hope, Idaho for the North West Company on the lake in 1809. One of his associates remarked that the lake̢ shape resembled a human ear. Thus, he referred to it as Pend Oreille, a French phrase for a pendant or jewelry that is hung from an ear. The indian tribe, the Kalispel, which was settled at the mouth of the Clark Fork River where the trading post was located, wore characteristic ear hangings of shells from the lake and river. The trading post was called the Kullyspell House which was Thompson̢‰â?ã¢s spelling of the resident tribe. The Kalispel, now often referred to as Pend d̢‰â?ã¢Oreille, are thought to have migrated south from British Columbia. They were referred to as river and lake paddlers and lived primarily as semi-nomadic fishermen and hunters. The tribes people lived in tipis and lodges built of cattails woven into mats.
The lake has had an interesting role American history. It was once a main part of the route for those seeking fame in the gold rush in the late 1800s. During the second World War, it was the home of a naval testing site for submarines due to its depth. It is still used by the Navy for some acoustic testing. The lake and its surrounding rivers also contributes as a source of electricity to the area. In 1952, the Cabinet Gorge Dam was built on the Clark Fork River and is privately owned. In 1955, the Army Corps of Engineers built the Albeni Falls Dam across the lake on the Pend Oreille River. The lake is now a tourist attraction for its beauty and fishing.