Reuniting artistry to Atlases in the late 1800’s

A teacher turned cartographer, Samuel Augustus Mitchell, a Connecticut native, decided that it was time for somebody to do something. Frustrated at the lack of quality resources available to teachers of geography, he uprooted himself and moved to Philadelphia where he founded his map making company after his frustration grew into action. He purchased engravings from the New American Atlas by Anthony Finley in the year 1826. as a basis for his new venture.  Augustus then hired Finley’s best engraver, Jay. H. Young to update and improve the printing plates. The goal was to keep them current since America was growing extremely fast during the early 1900s.

Augustus also found the appearance of the maps to be quite lackluster so he began to add decorative floral borders to them in what would later become known as his signature touch. In 1831 his first work was published, Mitchell’s New American Atlas. From there, he and Young produced several maps together as well as a guide for travelers. His next atlas would be produced after buying the copyrights and copper plates for Tanner’s New Universal Atlas. The purchase price at the time was a hefty $10,000.

Yet his purchase would prove to be genius later on. Rather than using the copper plates for printing, which would actually destroy them after very little use, he had the images preserved forever on lithographic stones. Once they were carefully transferred, they were virtually indestructible and would be used for just the remainder of his map making career.

As stated earlier, Mitchell Senior was known for his prolific use of floral borders. They are colorful and extremely decorative in nature. However, you will notice the borders changing if you view a Mitchell map from the late 1850s as most of the copyrights were acquired by Desilver and Company. They continued to publish many of his maps with modified colors schemes and borders.

Yet, Once Mitchell Junior took over in 1860, the style again became much more congruent with that of his father. Ironically, S Mitchell Junior became just as prominent as his father. He continued publishing maps well into the late 1880s until copyrights were once again sold and the Mitchell’s exited the map making business altogether.  Their original works are sought after today as a piece of American History and Nostalgia.

You can see how Mitchell is effecting my work in these images….There’s more to come! I promise. 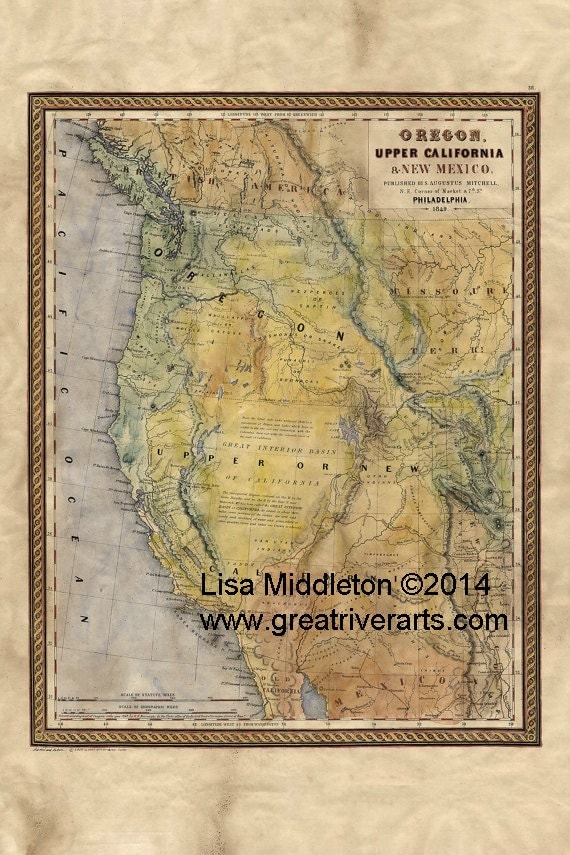