After the Age of Discovery enough information about geographical features from surveys had
been collected that map makers were able to create maps of much higher accuracy. During the
late 15th Century the Italians largely dominated map making. By the 16th and 17th Centuries,
the Netherlands had become the center of mapmaking. In the Netherlands two of the most
prominent figures that largely contributed to cartography and inspired further Southern
explorations were Gerard Mercator and Abraham Ortelius.

Gerard Mercator made substantial and remarkable achievements to the art of mapmaking. He
first established a reputation as an inventor of math and astronomical instruments while working
for Gemma Frisius, who was a widely respected mapmaker who had devised an exact method
of triangulation. In 1537 Mercator made his first map; it was of Palestine and engraved in
copper. Between 1541 and 1551 he began constructing large globes for which he gained
notoriety and influential clients such as King Charles V and Murad III, Sultan of the Ottoman
Empire. His globe making contributed to his becoming the first to create a cylindrical map
projection. In 1569, he created a World Map known as ‘Description of the Earth for Use in
Navigation’ which allowed for sailors to be able to follow a straight line on a flat map that
accounted for the curve of the Earth and calculate the distance to arrive at specific locations on
new lands. The map also took into account past charts, fictitious accounts of old maps, myths
and legends of different lands. It became the standard map used for nautical projections and
provided much greater accuracy than previously available. The map depicted Europe, Asia,
Africa, what was known of the Americas and a great Southern land mass which Mercator called
Continens Australis. His Continens Australis spans the Southern part of the map where today
we now know Antarctica is. Australia, New Zealand and the Cook Islands had not yet been
discovered.

Abraham Ortelius was known as the “Illuminator of Maps.” He traveled widely, spoke several
languages and collected many maps. In his travels he was able to connect with prominent
intellectual figures of the time including Mercator, Dr.John Dee, William Camden, Richard
Hakluyt, Humfray Lhuyd, Fillis Hooftman, among others. Several of his contacts began asking
him for specific resources. Dr. Dee requested maps on Asia, Hakluyt asked Ortelius to publish
maps of the Americas for the English market and Gillis Hooftman requested him to assemble a
collection of maps of Europe that were easy to carry and ‘not larger than a sheet of paper.’ His
first assembling the collection of maps of Europe ‘not larger than a sheet of paper’ inspired his
publishing a collections he called Theatrum Orbis Terarrum in 1570. Theatrum Orbis Terarrum
is considered to be the first modern printed atlas and included a list of 78 of the cartographers
he used as his source material in his Catalogus auctorum. By 1601 the list had grown to 183
entries. 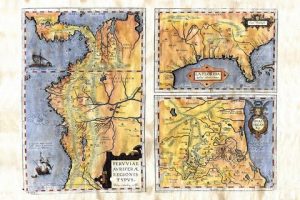 With sailors now having the capability to plot out and navigate with far greater accuracy that
Mercator’s projections provided and access to comprehensive collections of maps that Ortelius
assembled, many more great expeditions in the Southern Hemisphere took place. There was always curiosity about the lands to the South- the Great Continens Australis, which appeared on
Mercator’s map in 1569 and by 1606, the Dutch navigator Willem Janszoon ​is the first European
known to have landed on Australia. More than 20 Dutch explorers traveled to the western and
southern coasts during 1600’s and they first named the continent the New Holland. In 1642,
Dutch explorer Abel Tasman set sail from Mauritius in search of new lands in the East Indies
and was swept up in a storm. He landed on a the newly discovered island in Africa which was to
become known as Tasmania. Again 2 years later, in 1644, he set sail again and this time
discovered New Zealand. By the mid 1700’s James Cook sailed the further South than anyone
before was have known to. His expeditions lead him to discover the Cook Islands and Hawaii.
He charted Newfoundland (Canada), New Zealand and the Great Barrier Reef of Australia. 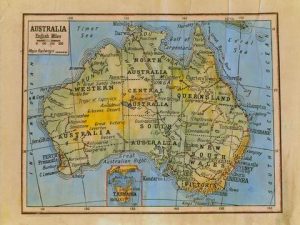 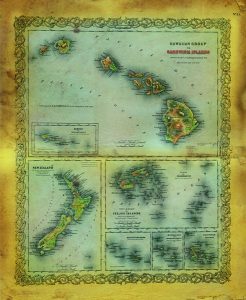 This map can be yours here: https://great-river-arts.myshopify.com/products/hawaii-new-zealand-and-the-sandwich-islands