This great, detailed, and elaborately decorated mappa mundi is believed to be the only surviving complete example of a medieval wall map of the world. It is housed in Hereford Cathedral in Hereford, England. The precise date and creator of this mappa mundi is unknown, but speculations have filled that void. Some scholars believe that it was done in the late 13th or early 14th century based on the style of drawing, appearance, and writing.  Others point to the presence of the Welsh castles- Conway and Caernarvon, built by Edward I following his conquest of Wales in the late 13th century, as hint of when the Hereford Mappa Mundi was likely drawn. Who created this intricate medieval masterpiece? It is hard to believe that it is the work of one man. This mappa mundi is considered to be derived from multiple sources woven together to create a single image of a world as it was understood in Christian Europe at the time it was drawn. One thing that 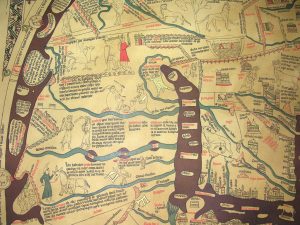 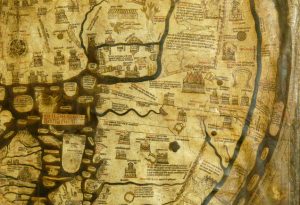 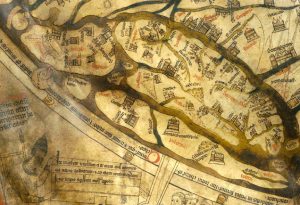 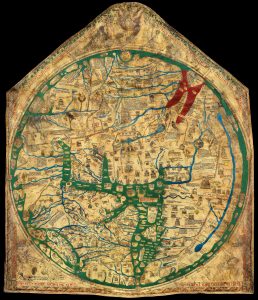 is clear is that the Hereford mappa mundi is mysterious, it grabs attention, and it pulls one into the ancient world.

Filled with images and texts, the mappa mundi brings together the timeless realm of the supernatural world with the physical world of geography, nature, history, events, and people. Some 500 drawings, 420 place names, 15 biblical stories, 33 plants, animals, and birds, 32 images of people, and 8 pictures of classical legends are all compressed into the illustration. Like most medieval mappa mundis, the world is presented in biblical terms with the tripartite (t-shape) style of mapping adopted. The t-shape is said to represent the crucifix, as well as the continents of Asia, Africa and Europe. Jerusalem is positioned in the center as the City of God, and east is at the top representing where the sun rises, and where medieval Christians look for the second coming of God.

Religion mixed in with legends and horrifying mythical creatures does not seem like the ideal combination. However, on the coast of the Black Sea, the legend of the Golden Fleece is drawn; the Cretan Labyrinth , the camp of Alexander the Great , the Garden of Eden surrounded by a ring of fire near the top, and the tale of Noah’s Ark are all depicted on this mappa mundi. Furthermore, different strange looking people are represented on the map, both in real and unreal forms.

The Hereford Mappa Mundi was not designed for use as a navigational tool at the time, but instead was an elaborate medieval work of art that was representative of the thoughts and beliefs of the medieval time period.