You might be wondering what this is and why it is important? Well, simply put, Mappa Mundi is Latin for “map of the world.” Is used in reference to European maps of the world produced during medieval times. Some of them are massive, elaborate, very ornate wall maps, while others are very rudimentary schematic maps measuring less than 1 inch across. Yet, they all share general common characteristics.

The amazing thing about the map is that it is part myth, legend, bible story, and recounts some very interesting creatures and people that supposedly inhabited the world at the time. 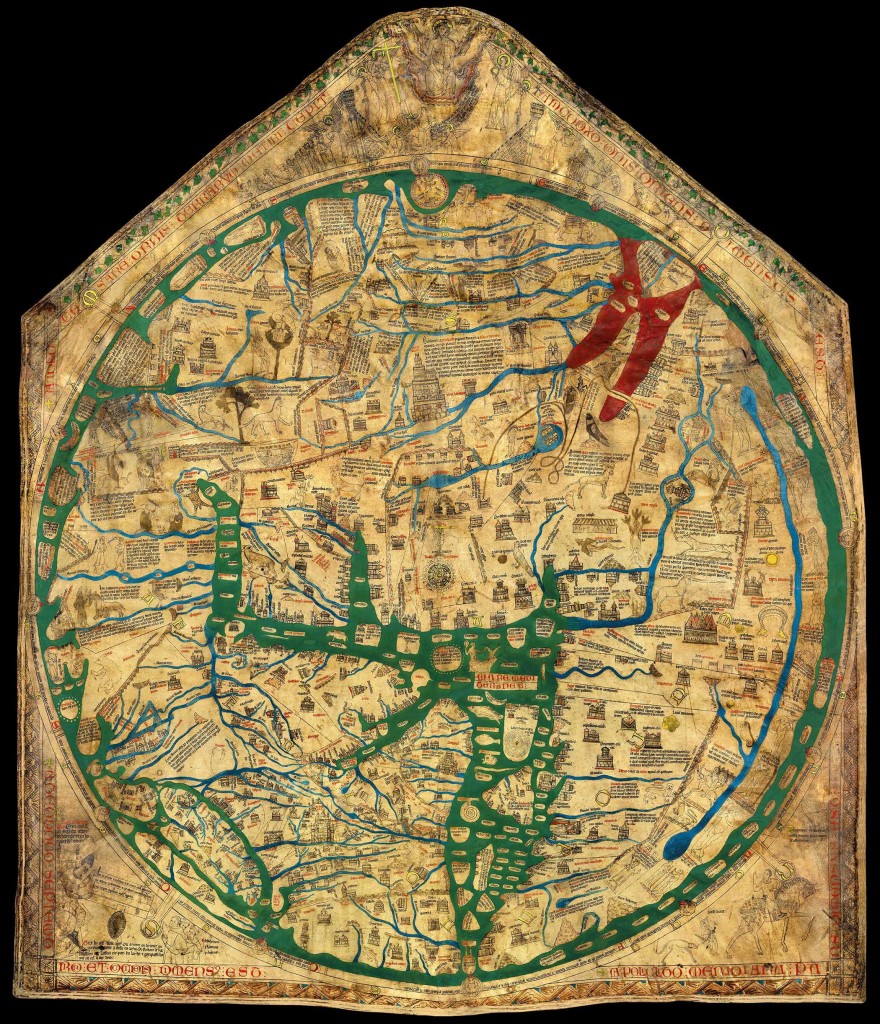 For instance, some of the more famous myths and legends found on the map include the columns of Hercules that were located near the Strait of Gibraltar. Supposedly, they marked the extreme western portion of the known world. Then of course we have the Golden fleece which of course was found very near to Greece.

The myth of the labyrinth and Minotaur can also be found on the map, as well as the camp of Alexander the Great. During medieval times, legends and myths about Alexander became emblazoned in the minds and thoughts of people. They found their way on more than one occasion to various maps during that time period. 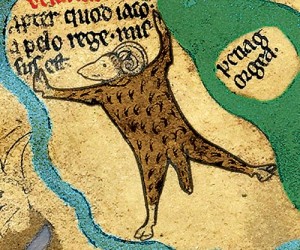 The myth of the “Golden Fleece” is alive and well on Mappa Mundi.

Bible stories that can be found on the map include Christ and Majesty. Simply look at the top of the map and you will find him there crowning the creation of the world. You can also find the garden of Eden. It is represented at the top of the map (east orientation) by a somewhat circular island. Noah’s ark can be spied as well as the parting of the Red Sea, the exodus, and Babylon (complete with the Tower of Babel). All of these stories were intertwined with their understanding of the world and helped showcase their ideals and thought processes in living color. This map presents many of the stories in a way that makes them real, whether or not the viewer would have regarded them as such.

To make the myths and stories real, several animals were added to the map. If you look closely, you can spot the camel, lynx, elephant, and unicorn. Okay, so that last one might not be real, but it sure makes the map that much more impressive with its inclusion.

Further adding to the fantastical imagery are strange and incredible people that were rumored to roam the earth. The Blemmeyes can be located as the people on the map with no head. Their face is etched into their chest. They were thought to be a fierce war like tribe of people. 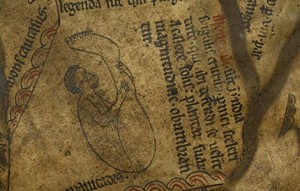 The Sciapod were a legendary race of people purported to have one large foot.

The Sciapods can also be seen on the map. They were a legendary race of people that reportedly had one large foot which they used to shield themselves from the sun. Several other odd races of people can be found as well if you have a sharp eye and know a bit of Latin. Of interest, are the Cynocephali, or dog head people. They were known to bark and could be extremely aggressive in one moment, while being quite docile the very next. Most historians agree that the interpretation here was viewed as more of a werewolf than anything.

See there, you thought the world was such a boring place during the Middle Ages. Everything was not all feudalism, crusade conquest, and Monarch dictatorships. There was a whole fantastic world that abounded and lived and thrived in the hearts and minds of the people. Though this map may be anything but historically accurate, it gives us a glimpse into the minds of people and what their thoughts, dreams, aspirations and fears were at the time. It seems that we humans are a creative sort. We have been making the world a fantastic, imaginative place to live, long before Hogwarts or middle earth ever existed. If you would like your own custom map featuring your favorite place in the world, please let us know. We can produce custom historical maps of any location. These make great holiday gifts, and can be passed down for years to come. We also have a great selection of work already in stock. Take a look and let us know what we can do for you!