Did you know that before this map Europeans believed that the world was divided into only three parts? They knew a world divided into Europe, Asia, and Africa. This ambitious project served to document and update new geographic knowledge derived from the discoveries of explorers in  the late 15th and early 16th centuries, and in so doing, expanded the knowledge of the world as it was understood. Notable depictions on the map includes the eastern and western hemispheres, the name “America” in the southwest corner in what is present-day Argentina, and North America labeled as “Parias”, while “America” is used to label the South American coast, extending to the present-day port of Cananéia, Brazil. 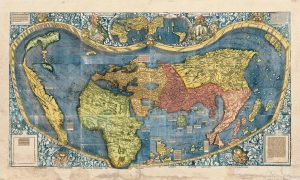 The existence of an unknown continent became a source of mystery and exploration for many in Europe, thanks to the voyages of Christopher Columbus during the 15th and 16th centuries. Columbus’ grand plan was to reach Asia by way of the Atlantic, but his faulty calculation of the earth’s circumference, landed him in the Americas. Cartographers illustrated and named this new land as they understood it, adding updates to new maps according to the accounts of explorers. So, how did the map Universalis Cosmographia Secundum Ptholomaei Traditionem et Americi Vespucii Alioru[m]que Lustrationes, translated as “The Universal Cosmography according to the Tradition of Ptolemy and the Discoveries of Amerigo Vespucci and Others” came to be?

In 1507, in the Kingdom of Lorraine, France, several scholars in St. Dié set out to create a large 12-sheet world map, and it was the obscure German cartographer Martin Waldseemüller, who named the American continent on the map in honor of Florentine explorer Amerigo Vespucci. For the first time on a map, North and South America were clearly depicted in size, shape and its geographic location represented relative to other territories. This extraordinary map was compiled from several sources, including the travel notes, letter (Mundus Novus) and charts of the regions of the western Atlantic newly explored by Amerigo Vespucci between 1497 and 1504, and the work of Alexandrian geographer Claudius Ptolemy, Columbus and other explorers with existing knowledge. Most significant, it depicted the New World in a dramatically new way.

Father Joseph Fischer S.J. (1858-1944), in 1891, discovered the twelve sheets, bound into a single cover in the library of Wolfegg Castle in BadenWürttemberg, Germany. Between 1983 and 1983, the map was lent to and out on display at the Smithsonian, and was later bought by the Library of Congress in 2001.

Order your own copy here: