Lake Pepin, otherwise known as, ”the Lake of Tears,” was formed by the delta of the Chippewa River, which flows into the Mississippi, at the southwestern edge of Wisconsin. The lake swells into a widening along the Mississippi River (See figure 1).  It’s status as a naturally formed lake is argued but, today, water sport enthusiasts can be found along with other boats and barges, carrying grain or fuel, busying across the main channel between Minneapolis and New Orleans. Old houseboats and railways hug the lake on their way between the Twin Cities and Chicago.  Its serene and picturesque quality is a desirable visit nowadays, just as it was for the many voyageurs and explorers who braved its topography in the past.1

“DENSELY wooded bluffs tower 400 feet over one of the world’s great rivers; timber rattlesnakes nest in rocky outcrops while bald eagles soar overhead; hidden behind the bluffs, small farms nestle among green hills, shady pastures and clear trout streams. To people who think of the Midwest as endless cornfields under a flat horizon, Lake Pepin, on the upper Mississippi River between Minnesota and Wisconsin, is a stunning surprise.

Even those who live in easy driving distance of this high-walled kingdom are often unaware of its unspoiled beauty. On holiday weekends, cars stream from the Twin Cities of Minneapolis-St. Paul, less than 90 minutes away, to better-known lakes up north. Only a few knowledgeable explorers turn south instead, heading for the spectacular sandstone and limestone cliffs along the Mississippi”2

Indigenous populations had been living along what is now known as Lake Pepin, for thousands of years before the first European explored the region.  The “Legend of the Maiden Rock” was one legend passed on through the generations about a young maiden who leaped to her death, from this rock formation, after her marriage into an enemy tribe was denied.  Mark Twain sketched this landmark in his chronicles.  (See Figure4) 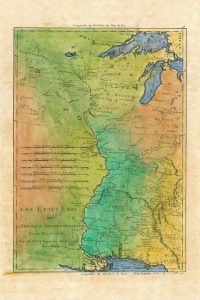 Figure 2: Les Etats Unis, c. 1781 Rigoberto Bonne.  An example of the quest for French explorers to map New France, now known to us as North America.

By the mid-1600’s, the French had begun to send expeditions into Wisconsin through the Great Lakes and St. Lawrence River. King Louis XIII of France is believed to have granted a huge piece of land in the Upper Mississippi River Valley to two brothers, Etiene Pepin de la Fond and Guillaume dit Tranchemontagne. Two of Gillaume’s sons, Pierre Pepin and Jean Pepin du Cardonnets, names are connected to the lake, and the county, having explored the area themselves.

In 1680, Father Louis Hennepin and others, set out in a canoe to explore the upper Mississippi River. On April 12th, soon after their arrival at Lake Pepin, they were taken captive by a band of the Sioux natives (Dakota). Father Hennepin preached to his captors.  They ventured between Sioux and Chippewa territories down the Mississippi, continuing as far as the mouth of the Chippewa River.

Lac de Pleurs (Lake of Tears) was the name given to Lake Pepin, by Hennepin, who camped on the shore of the lake in 1680. He named it after observing his Sioux captors weeping near the lake over the death of a chief’s son.

In 1686, Nicolas Perrot, claimed the Lake of Tears (later Lake Pepin), in the name of the King of France, along with all land that drained to the Mississippi River.

French trappers and traders dominated commerce along the Mississippi River for the next hundred years.  French Canadians then settled the surrounding areas.  Large numbers of French last names continue to be recorded today.2.The lake was first named in a map of New France made by Guillaume Delisle who was commissioned by Louis XIV of France in 1703. 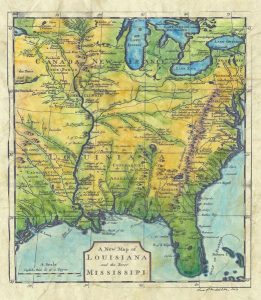 Delisle’s 1718 Carte de la Louisiane et du Cours du Mississippi is an example of French cartography at its best.  Delisle’s map became a source map for all maps of the Mississippi River during the period.  Note the relatively accurate depiction of the Gulf area. The map is centered on the Mississippi River and the interior of what would later become the continental United States. It spans the area from the bottom of Lake Superior in the north to the point at which the Rio Grande meets the Gulf of Mexico in the south; the map also extends from the Atlantic coast, where numerous European settlements had been made, and westward to the Rocky Mountains.

The map includes Indian territories and English colonies. The hundreds of labels on the map name lakes, rivers, colonies, cities, forts, mountains, and Indian tribes.  Next to the legend is a 16-point compass, placed in the center of the Gulf of Mexico. A fleur-de-lis indicates the geographic north.

Napoleon Bonaparte was responsible for the Louisiana Purchase to the U.S. government in 1876, giving over forever a land that was once predominantly native, then French and which accounts for much of the Cajun population and culture today.

In later years, Lake Pepin drew many literary greats, including Henry David Thoreau, Mark Twain in the city of Red Wing.  Mark Twain chronicled one of the sad river tragedies of history in Life on the Mississippi– a memoir about his four years of steamboat piloting before the Civil War. Charles Dickens traveled up and down the Mississippi on the great steam boats of the time. 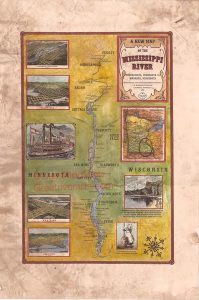 Figure 4: Upper Mississippi River Fridley to Wabasha:The upper portion of the Mississippi River from Fridely to Wabasha.  Pepin is the birthplace of Laura Ingalls Wilder, best known from the book and television series, Little House on the Prairie. It is also the location where Mark twain sketched an illustration of Maiden Rock as a passenger aboard one of the steamboats used for commerce and trade up and down the waterways of our budding nation. 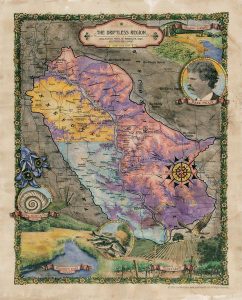 Forests, prairies, wetlands, and grasslands provide ideal habitat for wildflowers and wildlife. Farming continues to be an activity that thrives in the Driftless Area.  It is an area ripe for fishing a variety of trout including brown trout, rainbow trout, and brook trout.  Whitetail deer and wild turkey, ring-necked pheasant, along with other games such as ducks and geese, grouse, quail, mourning dove, rabbit, squirrel, raccoon, fox, and coyote can all be found there.

The Smithsonian Magazine chronicles the age of steam boating as “Glorious…floating palaces.”  It continues by stating that steamboats “transformed the movement of people and goods on the river, formerly limited to flatboats and keelboats borne by the current, which were destroyed for scrap wood at the river’s mouth or laboriously pulled and poled back upriver. Nicholas Roosevelt (great-grand-uncle of Teddy) introduced the steamboat to the Mississippi when he steered the New Orleans into the river from the Ohio in 1811. During his journey, when he had occasion to turn the boat around and steam upriver, onlookers gaped and cheered.”

“Charles Dickens, who in 1842 rode three different steamboats down the Ohio and up to St. Louis and back again, had the vocabulary knocked out of him when he first saw one. In American Notes, he writes that they were “foreign to all the ideas we are accustomed to entertain of boats. I hardly know what to liken them to, or how to describe them.” Lacking any “boat-like gear,” they looked as if they were built “to perform some unknown service, high and dry, upon a mountaintop.”8

In 1890, Lake Pepin was the site of one of the worst maritime disasters on the Mississippi.  The Sea Wing ferry capsized in a terrible storm, killing 98 people and came to be known as the Sea Wing Disaster. 9 And, in 1922, Lake City native Ralph Samuelson invented the sport of water skiing on the lake. Ever since that date, Lake City has been known as “the birthplace of waterskiing.” The city celebrates with a festival called Waterski Days every year on the last weekend in June. The lighthouse at the entrance to the Lake City Marina is the only working lighthouse on the entire Mississippi River.10

Lake Pepin, or the Lake of Tears, once a home to warring native tribes, attracted the likes of kings and explorers alike during times of conquest and emerging imperialism. And, In later years it has come to be known as a peaceful and serene setting, which some of the most influential authors of our times gave notice and found it to be their muse, and that tourists and inhabitants consider to be a jewel on the Mississippi.

See all of our Lake Pepin maps Here!

See all of our lovely Mississippi River maps here: