Let’s talk about dragons for a moment. Take a look at any antique map from the 15th or 16th century, then walk forward through time to present day. You can literally see the world take shape, through cartography, as new explorations and discoveries were made. Along with those findings were close encounters of fantastical, never-before-seen creatures, ranging from things like the giraffes and elephants of Africa, to the walruses and sea lions of the arctic lands. It must have been quite a shocking experience to view them for the first time. Those animals were not native to your land. 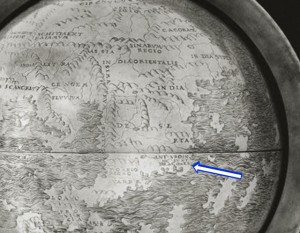 There were also other creatures noted on maps as well, the mythical creatures we call dragons. In fact, you may be familiar with the term “here be dragons.” This popular, descriptive phrase can be found on the Hunt – Lenox Globe (c. 1510). The Latin phrase reads… HC SVNT DRACONES (here are dragons). On the globe it is scrawled along the east coast of Asia. That’s it. No further mentions on any other map. Yet that one phrase has become rather sticky. We still use it centuries later. Here is why.

In early times when people sailed the globe, the fear of the unknown was always an issue. However, you could not just say “I’m afraid of something I don’t know!” A story had to be created (you were an explorer commissioned by the king after all). That “story” would be created sometime around the 14th century. The ecclesiastical church would have a hand in the matter as fate would have it. The biblical imagery of Satan, taken from the book of Revelation which describes him as a dragon, would become a descriptor for any instance involving something unknown, or unexplained. There would be dragons there, so to speak.

So essentially, every time you look at a map and see a mythical dragon depicted, you can be almost certain that one of two things is going on. Either the explorers were nervous since they had not ventured into that particular territory so a dragon icon would be used to identify that…

The cartographer is simply giving a head nod to this ancient saying that was uttered once, yet has stuck in our hearts and souls for hundreds of years. Look long on most maps from the 15th-17th century and you will find examples of both. Here are some of the best representations from some various maps of the world.

Ichthyocentaur- This was a dragon that was half man, half human. You can see a fantastic representation of this on 1573 edition of Ortelius’s Theatrum Orbis Terrarum. This dragon could be found in Scandinavian waters and was generally thought to be peaceful. It’s presence on the map most likely indicated this was an area of safe passage. 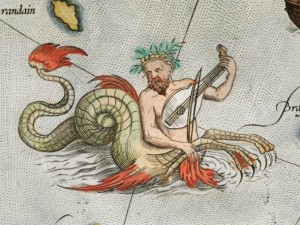 Additionally, there is a depiction of the famous Bible story where Jonah is thrown over and swallowed by a whale. Only in this version of the cartographer’s story, he gets eaten by a dragon. 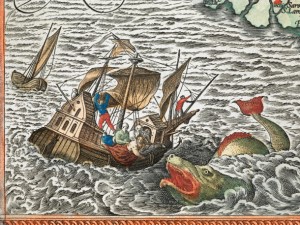 Scotoplanes- This creature is known as the Sea Pig. Take a look at the cartoonish representation. It’s creation stems from a long held belief at the time that every animal on land had an equivalent in the ocean. They were just yet to be discovered. 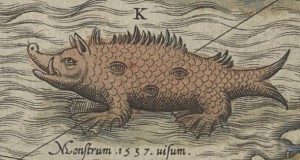 Ceteceans- These are known as whales. Though they were a known animal at the time, yet on maps they are often dressed up a bit as this illustration from Olaus Magnus’s 1539 Carta Marina shows. They are very “dragon like” in their appearance with horn like blow holes and razor sharp teeth. 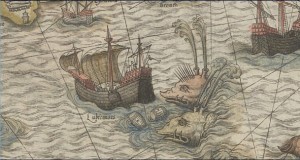 Seiren- These are the mermaids, often found free spiritedly roaming the waters, as depicted here in this image from Pierre Descelier’s map from 1550. Known as sirens, they were known to be wily and seductive. 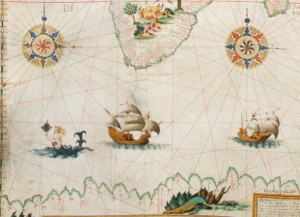 These are just a few of the hundreds of dragons you can find on maps from the 12th-18th century. They come in multiple shapes, sizes and colors. They can be found idly roaming the sea, or wrapping themselves around ships in a mad rage. All of this rich imagery and legend because someone once uttered, “don’t go there, don’t do it. Aye, there be dragons there!”

Want more updates? Follow Great River Arts on Facebook. Curious as to what the talented Lisa Middleton has been up to lately? Visit her online store and sate your curiosity. Visit Lisa’s Antiquarian map collection for more maps with dragons and other fantastical creatures!